The old city of Glazz'gibrar has been abandoned to a waking nightmare, unleashed to destroy the old monarchy and entomb their loyalists. Now, in the warmth of a distant vassal caldera, where the sun perpetually skims the horizon, the survivors of the nightmare-razing made a new city across the oceans of the Underdark.

November, the City in Perpetual Twilight.

From the freezing peaks of Galea, to the abyssal depths of Tenebris, the dark elves make worship to their stolen Gods. It is an ant colony of a thousand divines: taken, found, seduced, imprisoned, entombed. Tutelary gods of forgotten nations, de novo genius loci, artifacts of religions no longer worshipped - all find themselves caught in the web.

It is said that the Goddess of Poisons (whose name has been stricken and worship outlawed) died with the monarchy. But her secret cults know this not to be true. Like any god that survives the tests of time, she has been adapted and reformed into something new. The poisons of the Kingdom, now the venoms of the Republic. She is survived by politics and daggers.

Twilight City is lived in by many folk: Lesser Houses, guildsmen, free folk, foreigners, slaves and the undead. If they are fortunate or well-connected, they live somewhere warm with modest amounts of bread and wine. If not, then not even death will give their bodies respite. Their gods are the gods of some: freedom, vengeance, death, fertility, home, light.

Every house has a little god. Every street has a spirit. Every neighborhood a shrine. Every district a temple. They nearly all came from somewhere else, moved through the dark tunnels below in a millennia-crawl that ended here, in Twilight City. Not even the very wise know them all. The cityscape is a fractal labyrinth: tunnels upon tunnels and mazes within mazes. 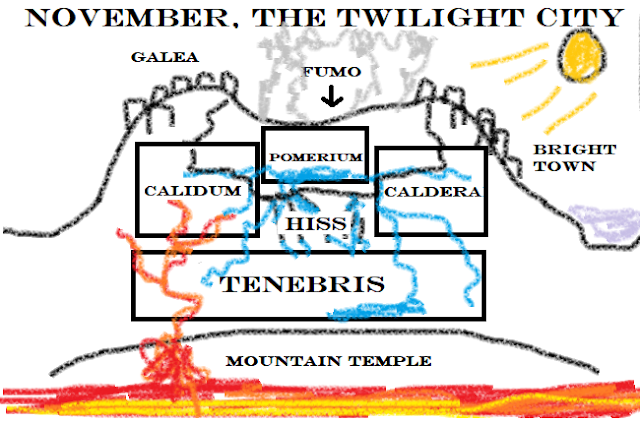 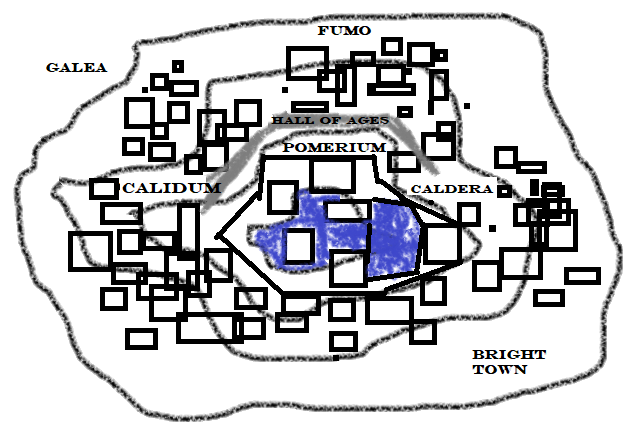 GALEA: Where naught but the least fortunate live. The cold winds of Sunless Rim shear across the district, freezing flesh to bone. Graveyards and crypts for the undead to rest. Even air is peddled here.
FUMO: A town's worth of people thrice-choked: fumes from below, the pooling smoke from burning the Dreamwood's bounty, the bitter haze of drug houses. Smoke pools in the gutters and the streets. Lakes of it form in low places, occasionally sent hurtling through the streets by gusts. An unenviable place to be.
BRIGHT TOWN: Ever within the rays of the Sun. It is a despised location by the Underdark denizens, but highly tolerated by surface dwellers. It lies on the surface roads that lead from the city to its empire. The outlying human settlement of Knife's Edge lies precariously upon a balance of opportunity and mortal risk.
POMERIUM: The city's sacred religious and political center. Walled off from the other districts with volcanic stones. No weapons or magic are allowed within. Guarded by sacred ancestor-wraiths and feared imperial blackguards.
CALIDUM: A hot, desirable place within the lower interior of the caldera. Houses a number of senatorial estates, elaborate bathhouses, commercial markets, and entertainment venues. As the major crossroads of the city, it receives frequent attention in the form of architecture, art, and science.
CALDERA: Herein lies all the city's medians. A zone of moderate climate and pleasant temperature. A frequent battleground for influence and development. Behind the pleasant façade, Houses, Guilds, and Interests wage a political war which not infrequently spills out into the streets.
HISS: The misty nabe. Water flows down from above in dozens of waterfalls, aqueducts, rivers, and misty fountains. Every surface precipitates, and every alley hides knives. Everything that resides in Hiss has something to hide, and so its people tend towards the esoteric and criminal. One much watch where they walk, in both the literal and figurative sense. An errant misstep can send one as easily into a dangerous den as careening off a cliff.
TENEBRIS: "All things flow to Tenebris": the deep sweltering dark. Vast fields of fungi tended by pale-eyed denizens. The final destination of all the city's forgotten waste. Long winding tunnels hollowed out by monstrous things. Protein farms. Spider workshops. Endless pits. It is the dark frontier of the city's reach, where unspeakable things make home.
THE MOUNTAIN TEMPLE: The realm below the city, and a city unto itself. The heart of the mountain. It is guarded from above by great Magmatic Gates, and below by elementals beholden to a Prince of Fire. None of flesh survive here long. Slaves are sent down, and they do not return.
at May 12, 2022