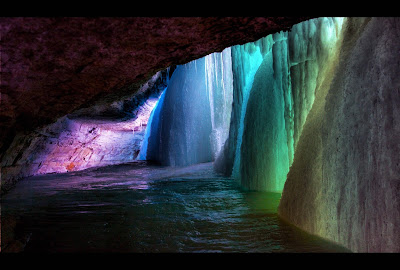 The name of the district is an onomatopoeia of the sound of the district's numerous waterfalls, which cascade down from the Pomerium along aqueducts and reservoirs, over buildings and through peoples' homes. Moisture is heavy in the air. There's an ever-prevalent mist. The people who live here tend towards the esoteric and strange.

Having a guide is recommended. You never know what may be lying in wait through the next waterfall. The district is home to a great number of people with things to hide, and so tends towards the criminal. Floating gambling dens, waterfall drug lairs, and waterlogged brothels are common. Wherever there is dry, sure footing there is sure to be someone imposing standing there with a bludgeon or a quarterstaff, barring passage.

The Temple of Knots

The temple is one great continuous knot of ebon rope, miles upon miles tangled up into a labyrinth of twisting passages and odd protrusions. The shape of it from afar gives the impression of a black lump of metastasized cancer, many arms feeling outwards and upwards, feeding on the capillaries of the city's aqueducts.

There are many secrets within, or so it is promised. But does any particular outcropping of rope lower the drawbridge, or pull the floor out from under you? Does this loose bit here open a secret door or spring a trap that yanks your arm into the wall? Only the High Priestess of the temple knows what every knot keeps, and which ropes must be tied to reveal all the temple's secrets.

The priestesses say there are knots within every living thing. Trillions upon trillions, twisting and untwisting, writhing and loosing. The knots keep an order of things, and they know how to tie and untie them. They wear black heavy robes that are said to be living creatures, bred and tamed in the darkness.

Strange things stalk the halls - strange, twisted things. Things that are too tall and things that are too wide. Things with too many teeth and too many limbs. Things with too many turns and too many coils. Terrible things which hide behind the waterfalls with rope-like arms that strangle and devour. Once one of these things escaped, and the people have whispered of "ropey horrors" ever since.