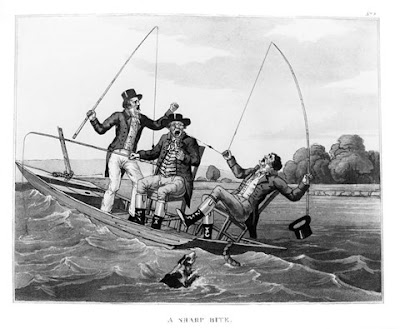 What? You thought by the title that this was going to be about storylines and player-character incentives?? THINK AGAIN! It's about fishing. The ultimate expression of FREEDOM!! You don't get plots and hooks and plot hooks in Deadwind, it's too chaotic. Instead, we get fishing.

Example: I roll a 7, an 11, and a 16. I'm catching the Scummy Demonic Vampirefish with a Blood-Gorged Leech in a Salt-Sausage Magic Circle at a Filth-crusted Pond.

Back when I'm pretty sure barely a single soul read my blog, I wrote about the Island-City of Deadwind. And now that the possibly exists that I may actually need to run it, it's time for some revisions. And, perhaps, this shall coincide with the semi-recent city challenge! As just so happens, its format works pretty well for how I imagined the city. 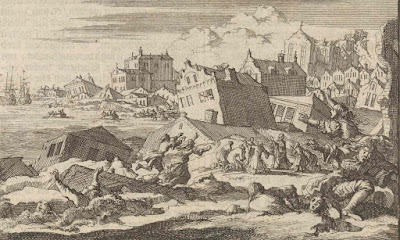 How does one design a just society? This was the question at the heart of the birth of Deadwind. To answer it, two principles were assumed:

1) Everyone is to have basic liberties afforded to everyone else.
2) Everyone should have opportunities to hold power.


"A JUST SOCIETY IS A FREE SOCIETY. GO, NOW, MY DISCIPLES, AND BUILD A CITY UPON THE ROCK WHICH THE VENGEFUL WINDS SCORN. BUILD, AND BE FREE IN THE LIBERTY I SHALL PROVIDE!"

And so it was thus. On the Island-City of Deadwind, by divine mandate the hands of power shall change every three days. There shall be unceasing revolution, that the powers of Leviathan should never take hold. Thus, shall everyone benefit from the universal liberties and true equality owed to all people.

Deadwind, in its truest sense, is an anarchistic pirate colony with civil unrest built into its bones. It has no monetary system, no codified laws, and no entrenched class systems... At least none lasting longer than three days. Everyone has virtually the same opportunities as anyone else to temporarily hold the trappings of power, no matter how fit or unfit they may be. Trappings of power backed up by a goddess, no less. 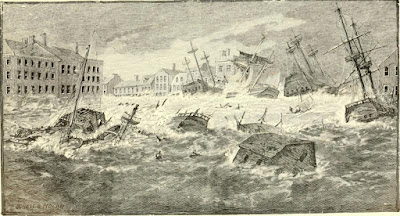 To determine the government for the present three-day period, I'd recommend using the most interesting forms of government you can find. Such as These, And These. And when you've run out of great ideas or feel like throwing things to the dice gods, then consult the table:


ON THE THIRD NIGHT, THE GODDESS LIBERTY DOTH ANNOUNCE...

So, let's say you've achieved ultimate divinely-mandated power. What can you do? Well... Virtually anything, provided it won't bring absolute end to the society. Most people in Deadwind, however, decide to do nothing with their power. Absolutely nothing. It's the safest option, to be sure, for Deadwind has a strong culture of eventual reprisals against those who use their power to inconvenience others. The riskiest maneuver you can do is to piss someone off, no matter how much power they wield, 'cause that can turn around before Sunday.

People will usually obey any commands given to them by people in authority, though they typically won't like it. These are usually pirates and pirate-aligned folk, after all, they have a mean anti-authoritarian streak. Completely disobeying, however, is considered a moderate sacrilege. Revolution and dissent is expected, when the time is right. Rebellion is not.

The second most common occurrence is that the people in power throw a party in their own honor. It's like the equivalent of a payday celebration, lasting three days and nights, usually including all the losers of the Contested Government, to make sure there's no sour feelings which might result in reprisals.

Singing is common and public. The combination of sailing culture and the dubiousness of property ownership means instruments and other material entertainments can be rare. If someone's doing something on Deadwind, there's probably a song or a tune about it.

Drow who can't make it in Twilight City make the arduous journey to Deadwind in hopes of wielding power and getting rich. The egalitarian pirate culture is well-suited to countering the biases against them they find in other societies. There's a deep subconscious connection between the Drow and the Ocean, and many of them describe taking to a waves as a kind of awakening - a rediscovery of a past life, a delve into genetic cultural memory.

How much suspicion the Drow are treated with is largely dependent on how many there are. A lone Drow alone doesn't ruffle any freedom-feathers for the Deadwinders. A pair of Drow is a conspiracy. Three is a Coup. The more Drow together, the more they are mistreated with intimidation, violence, and (temporary) systematic oppression.

Everyone's got their own definition of Freedom. For the Orcs, that definition usually involves their personal freedom to inflict physical violence. They rarely get the idea of Deadwind.

As such, they're usually the first question a government addresses: What do we do with those darned Orcs? Do we ignore them? Exile them? Imprisonment? Genocide? Force them into gladiatorial combat? (They usually approve of that one.) Force them to clean the docks? (They hate that one, more than the genocide, actually.)

Orc-lead governments on the island are almost always all the same thing: The Purge. Three days of continuous violence and anarchy. Liberty has never interfered with this form of government, but it's not very popular with the Deadwinders, and almost always results in new-government-led reprisals following that period.

Everyone finds these guys hilarious. Philosophers? On Deadwind?! Everyone's pretty sure Philosophy has been solved forever, and all those Falselings are just beating a dead horse whenever they pontificate on the ideal forms of government.

Historical case-in-point, the Falseling Philosopher-King Astranarilus famously gained rulership some thirty years ago by a monumental 100% mandate from the populace through his superior skills of rhetoric and rulership. Those three days were the most prosperous and peaceful the city had known in its entire history. Folks named their children after him. Strangers pledged their lives in service to his greatness. People were writing and singing songs about him by his government's end!

The very next day, a toddler-king made him eat shit. Literally. Three days of the only act of government being "Astranarilus must eat poop all day long!". And he did it. He ate shit as only the greatest philosopher-king could eat shit: like a fucking god. He died from eating too much excrement, and was promptly buried at sea. And so he passed into legend...

And this is why nobody takes the Falselings seriously anymore. It doesn't matter how great and perfect your ideas are, because the next day a complete moron could have you eating poop.

Filthy flying fat humans with seagull brains and feathers, stealing food and folk alike, for FREEDOM. Their catch-all catchphrase, the "FREEDOM" squawk. Steal food from your hand? "Freedom!" Kidnap a baby to sell to slaver-pirates for rotten fish? "FREEDOM!!" Dive bomb poop in your yawning open mouth at the crest of dawn?

Maybe they just really really like Freedom TM? Or maybe that's their language: consisting entirely of tonal and contextual permutations of the word "Freedom". Or maybe they just use that word a lot because they know it triggers a sympathetic Pavlovian response in the freedom-loving populace of Deadwind. Maybe... Maybe! Maybe they're just operating on the Truest, the greatest, the most ultimate levels of liberty! The kind that involves pooping in unsuspecting peoples' open mouths.

Anyway, nobody cares if you mistreat or kill them. Except maybe some of the more aesthetically-minded Liberty Clerics, those weirdos. 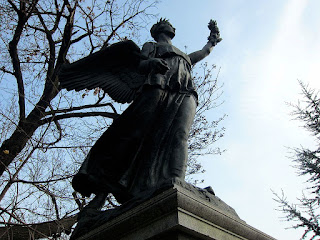 Statues of the Goddess Liberty - the defense system for the preservation of the city's society. If any person or faction becomes so powerful that they could effectively prevent the transference of power as divinely mandated, the Goddess herself possesses these statues to, let's say... equal the playing field...

...WITH GIANT STONE FISTS OF FREEDOM!

The Goddess Liberty and her army of muse-golems will beat your ass into a puddle of soup for the Gullmen to slurp up if you mess with her mandate. They're immune to divine magic. They're ten feet tall and hard as nails. There are more of them than can be taken account. And if somehow all of them are destroyed she'll start animating coffins, bloody pieces of furniture, houses, or whole-damned sea-faring ships.


This has famously happened several times in the oral history of Deadwind, almost always to foreign visitors who, once coming into power by the lottery of Liberty's mandate, refused to give it up once their allotted time was finished, or tried to break the system by guile and cleverness.

For Example: The now-infamous Drow House Siliman, upon gaining power, lead by the newly christened Novo-Matriarch Uulisil, quickly created a class structure to use one-third of the population to sell the other two-thirds of the island's population into slavery and ship them abroad. During the spare time they destroyed every single Liberty statue on the island. At 3 Day's end, the ships carrying the island's population morphed into giant Liberty ship-mechas and blasted the Drow into oblivion while angry freed-mobs rained projectiles from their shoulders.

The Orcs, once upon gaining power, simply decided to round everyone up and slaughter them all at once. They succeeded in a few instances, before the Barricade Elementals came.

The Wizards of Chronulus, upon gaining power, attempted to extend their 3-Day rule by using time magic to repeat the same three days over and over. Guess who's still stuck in that revolutionary time loop? It sure as hell ain't the people living there now!


THE GHOST OF LIBERTY

Well... At this point in writing this post I have made two references to ingesting poop, which is exactly two more references than I wanted or intended to make. Might as well make it a hat trick.

There's a spirit of the city. A ghost, some call it. The Ghost of Liberty. It lives in the narrow dead-end alleys, down under the filthy Gullman-infested docks, by the seashore caves among shrines of flotsam and ocean-weeds. It causes coffins to spring from their graves and barricades to suddenly explode like volcanic spew. Where detritus gathers (as often it does) the spirit lingers, disassembling and scattering and disappearing the waste. It keeps the architecture narrow and winding, it makes deep places of stacked refuse and collapses monuments of projected power into sinkholes.

The Ghost is to the city as a beaver is to its river: it moderates the ecosystem. It provides shelter and it taketh away. It tears up city blocks overnight and rebuilds them askew and crooked. It maximizes surface area. It whispers in alien dialects to the soft vulnerable minds of pirate drunkards, telling them the secrets of its sustenance...

"Release thine bowels in the gutter. Nobody will know. I doth require snack."
at November 21, 2019 4 comments: