When considering orcs for Tidelock, my homebrew setting for a Tidally-Locked world, there were three principle questions:

Why are they savage?


The answer to the first question is that I wanted to leverage the associations that people have about Orcs thanks to their immersion in fantasy tropes. It's already there. Everybody's got a decent idea about what an Orc is. I don't need to explain to a new player about the core concept of an Orc.

The second one we answer by getting into worldbuilding. More on this below.

For the third question: 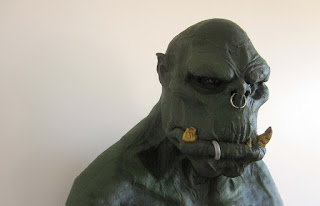 In Tidelock, Orcs are savage because every single one of them grows up killing and eating about a thousand of their siblings before maturity. They grow up in pod-like colonies in the soil, colonies created by the spilled blood of an Orc dying a Flowery Death.

About a thousand zygotes start out, growing in the soil like frog eggs. Over the course of weeks and months they grow larger, eating their siblings and gaining strength. Eventually toddler-sized premature orclings will be biting each others' limbs off and cursing fate in tongueless, language-less speech. Only one, maybe more than one, will survive this cannibalistic culling. And that's assuming predators haven't gotten to the colony. (Orc caviar is in the highest demand)

If more than one orc survives this process, they are known as siblings. In Shadowmountain language, sibling is translated to Common as: "The one I didn't manage to kill... yet." It's somewhat expected that siblings of a stock will compete and vie for power and murder each other at some point. 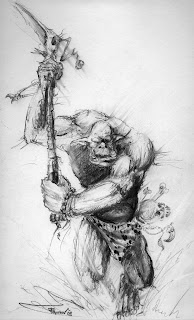 Depending on the fertility of the soil, out can erupt out a fully grown mature Orc in anywhere from a week to a few months. More fertile = sooner. Most Fertile Soil, drenched in an Orc battle, can probably produce a couple hundred orcs in a few hours.

Violence is built into the Orc's (asexual?) reproductive cycle. In order to reproduce, an Orc must die a Flowery Death. Bleeding is a requirement. Their veins become filled with zygotes and adrenaline at moment of death, as life-blood bursts out of their wounds. They enjoy this. It's like sex to them. They probably regard the person who disembowels them kind of like a partner. It's really weird to us. To Orcs its normal.

Orc culture is a strange phenomenon. Given this necessity for violence, one would think the Orcs incapable of having a stable society, but they'd be wrong. Elsewhere Orcs grow up feral, but in Shadowmountain there is tradition. Great lineages of blood-begotten warriors are curated by ancient Orcish scions - immortals grown so powerful that they are peerless, and hence incapable of enjoying a Flowery Death. (A common misconception, that Orcs live short lives. They are effectively immortal, it's just that immortality sucks.) 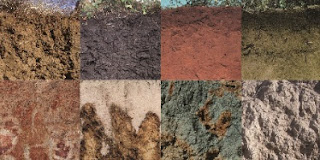 Orcs take on an appearance similar to the soil they were bled into. Orc blood spilled into clay makes Clay Orcs. Orc blood into sand makes Sand Orcs. There are as many Orcs as there are types of soil, and a few more. It's rumored that in Shadowmountain there exists a melancholic aristocracy of Orcs born from ten-thousand years of incubation in metal. Iron Orcs, Rock Orcs, Quartz Orcs. They are sad because there are none who may grant them the death they desire.

The aristocracy spends their days teaching younger, more hopeful Orcs, writing sad poetry about how beauty is fleeting, and drinking tributes and the loot of raids. Alcohol isn't quite as good as a Flowery Death, but it's something.

They say there's a great Orc of diamond body that sits upon the Bleeding Throne, older and more powerful than even the oldest Elves, though none claim to have seen him. None likely will. There are laws against outsiders coming to Shadowmountain, for which the penalty is death. Laws set not for Order, but as a challenge. Intruders are set upon by legions of Would-Be-Slayed, wanting Flowery Deaths. One would need to literally kill their way up the aristocracy, all the way to the Throne.

Once every ten-thousand years, it is prophesied that a Hero will be born under a Hunter's Moon and a Lunar Eclipse, with a bloody birth that kills the mother. This Hero in time will purge Shadowmoutain of all Orcs, granting them all Flowery Deaths, down to the very last one. The Orcs dream of this day. They will relish it. This Slayer of Orcs is their cultural hero - an apocalyptic saint of death and future rebirth.

A Hundred Years of Peace will reign, until the death of the Hero.