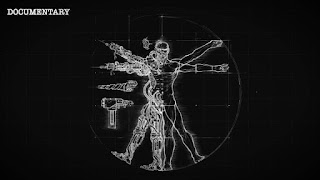 Two important things about the Alpha-Technomancers:

A) They're trying to achieve the Technological Singularity. They're almost there. They built a God, Alpha, the pinnacle of A.I. with the power to create and design, but incapable of destruction. Alpha and the Technomancers are building its twin opposite, Omega. They're almost done.

B) They are obsessed with paradoxes, and love philosophically stimulating technology.

There are many great tables for cyborg/robot men out there. I'm not going to make a table for making Technomancers.

Instead, here's a table for what each Technomancer is carrying:

What is the Technomancer Carrying? Roll 1d10:

1. Pain Machine - A plain handheld grey box with a big red button on it. Its only function is to feel pain when the button is pressed. It is:
i. Being pressed experimentally on occasion.
ii. Duct-Taped into the compressed position. That asshole!
iii. Installed with a scream emitter w/ knob control. Currently on low volume, can hear it when pressed up to your ear.
iv. A fake. This technomancer couldn't be trusted with a real piece of Science!

2. Perpetual Motion Machine - 3 in 6 chance it's fueling this Technomancer. Otherwise it is a fascination.

3. Too-Efficient Perpetual Motion Machine - "Oh Alpha, it's generating energy at an exponential rate! WE'RE ALL GOING TO DIE! THE UNIVERSE WILL END! WHAT HAS THIS UNIT DONE?!"

4. Cavity Fractal Pilot - A miniature pilot rests inside the chest/head/ear/groin/shoulder/head polyp tumor of this technomancer, piloting them with a series of levers and buttons. Inside that pilot is another, smaller pilot in another cavity. Repeat forever.

5. Thomson's Lamp - An electrical lamp automatically switches on and off in a time period half of that of the last one. In 1d12 rounds it will complete its supertask. WHAT HAPPENS?
i. The Lamp remains off. "Well, that was boring, but not unanticipated."
ii. The Lamp remains on. "Disappointing!"
iii. The Lamp stays in a kind of Lamp-twilight. Half-on and half-off. The sheer MATH of it all blows everyones' minds. Save vs. Magic or fall to the ground convulsing and drooling for 1d4 turns.
iv. The Lamp turns into a horse and cart, fully functional. "Well, that was interesting, but not unanticipated."
v. The Lamp turns into a horse and cart... OF DEATH. Horse has stats of adult red dragon and breathes fire. It toasts things, tosses their ashen bodies into the death cart, then whisks it away into a new Thomson's Lamp fully formed on the ground. "AAAAAHHHHHHHH!"
vi. The Lamp explodes. Everyone in the room Save vs. Poison or die.

6. Relativity Machine - Backpack-sized hunk of whirling chrome emitting near-subsonic pulses that make the ears itch. It makes time feel slower the closer you get to it. Closer you get the higher the pitch of the noise. Those in close proximity are effectively slowed although they won't notice it (it just looks like everyone far away from the machine is going fast). Those far away are effectively hastened. Mid range has no mechanical effect.

7. THE DEVICE - Looks like a fist-sized clump of ebon black silly putty with a red L.E.D. timer on the top. Actually hard as solid rock.

THE DEVICE is counting down, from some number to some other number, in a mathematical system nobody understands, never repeating any symbols or digits. Nobody knows what will happen when THE DEVICE reaches it destination. Not even God, or Alpha, or Nyarlathotep, or even THE DEVICE itself.

In 1d20 turns THE DEVICE will finish counting down. When that happens stand up. Declare that THE DEVICE has stopped ticking. Close your book/binder. Without another word go off to the nearest restroom and stare at yourself in the mirror silently for exactly 5 minutes straight. Ponder the reasons of why you chose to perform this silly metagame stunt. If anybody asks if you're okay tell them: "My D&D module instructed me to do this". Return to the table. Continue on with the game and never ever mention THE DEVICE or include it in any of your games ever again.

8. Portable Cerebral Averager a.k.a. The Mean Machine - A big flashy-lighty-machiney. When used as action, sucks up the Intelligence of everyone in the room (or 30 ft) and redistributes the average (rounded down) to all participants. Irreversible.

Has a 30% chance of breaking after use. 5% chance of getting the wrong attribute (roll 1d6, pick that attribute in the order on character sheet from top to bottom. If it hits INT roll twice again, repeatable until all possible attributes selected)

9. Lesser Chekhov's Gun - A bronze smoothbore pistol that deals damage equal to the most powerful ability/spell in the party. The gun must be fired during the encounter/scene in which it becomes known, or else misfires at the conclusion of the encounter/scene, hitting a random target in the room. Mini-version of the Greater Chekhov's Gun, which operates under the same principle, except that it instantly kills its intended/not intended target, no save.

10. The Essence of Dan Machine - This terrible machine distills the essence of Dan, the man who fails 5% of the time at everything. Every time the holder of this machine attempts to do anything... ANYTHING. They roll a d20. For most things the result doesn't matter unless it's a 1 or a 20, in which case they fail or spectacularly succeed at the declared task. Rolls on the lower end are hilariously inept. Rolls on the upper end are triumphs of mediocrity.