The Discomancers are a very silly lot.

Y'see, when one begins to contemplate the philosophical realities of the Infinity Hotel, when one realizes that they exist in a plane of Infinity, with an Infinite number of Everything therein, with the effective value of any particular thing being therefore Nothing, you get one of two things.

Discomancers are a bunch of Nihilists that have contemplated the Infinity Hotel and pondered its meaning, and, in the face of the absolute dwarfish-ness of their existence, have decided that the only proper course of action is to DANCE. To this end they have chosen the most nihilistic of music: Disco. 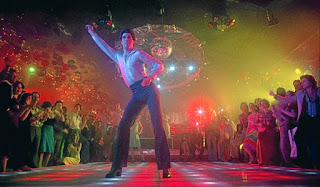 (You probably know what this is from)


Like the Infinity Hotel, there's always room for more people on the Infinite Discotech dance floor, and the Discomancers turn away no-one and nothing that wants to dance its cares away.

On the Discotech's ceiling is the chrome-d skull of John the Disco God. It provides the music and the lighting effects. It also provides the magic that causes all that hear its music to get down with disco fever.

It can get a little crazy...

Who's on the Infinite Dance Floor? (Results are cumulative, going down the table.)
1. 2d10 Discomancers, grooving to the beat...
2. AND a handful of squeemish labcoat-wearing scientists from the Hypermath Lab on break...
3. AND a cow named Beautiful Bess, just kinda chilling...
4. AND another 3d10 Discomancers. Now it's a party!...
5. AND a Wandering Monster, just trying to dance in peace...
6. AND The Gigamancer. Everyone's afraid he'll explode any second...
7. AND 2d10 Technomancers, doing the robot. Again...
8. AND a random Hydra...
9. AND a Paradox ArchAngle (sic)...
10. AND everyone. Literally everyone. Every single one. All occupants of The Infinity Hotel. 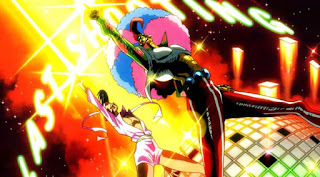 By pure happenstance the Discomancers have found power in The Dance. It's a strange kind of spellcraft, using the entire body in conjunction with others to create hypersomatic spells. Coordinated types like Fighters and Thieves tend to be better at this sort of magic than Clerics and Magic-Users. It requires an astute sense of rhythm.

Stayin' Alive: While this dance is being done, its performers cannot die or go unconscious.
Night Fever: Target proceeds to go on an uncontrollable vice bender.
Funkytown: Causes target to smell repulsive for a week. (Doubles in # of targets)
Don't Leave Me This Way: Performers remain adjacent to target, no matter where the target goes in relation to performers. The ultimate stalker dance.
That's The Way I Like It: Target must repeat last action until performers stop this dance.
We Are Family: Performers become retroactively related to the target. "Why would you want to hurt your long lost Uncle Bob?"
Get Down Tonight: Target becomes prone as long as performers dancing.
It's Raining Men: Not pretty. Men spontaneously fall from from the ceiling at terminal velocity in 10ft target area.
Macho Man: Performers buff up, doubling their Strength.
Dancing Queen: Makes a sound so annoying that it deafens everyone in a 50ft radius, including the performers.

There are two Discomancers of note: the Duke of Disco, Vladimir Vladimirovich, and the King of Clubs, Freddy Will.

Vladimir can be found in the VIP Lounge (its entrance is guarded by two hopelessly nihilistic burly Discomancers). He is a wrinkly old man adorned in the most clownish disco outfit imaginable. He is also the only person immune to the effects of the Disco Skull, so powerful is he and his will. At all times he is observing the disco floor, seeking to geometrically produce The Ultimate Spell. He's almost finished. Just a little longer...

Freddy practically lives on the Dance Floor. He eats, drinks, talks, dreams, and pisses Disco. He's got a gives-no-fucks wardrobe, bearing the most impractical and hyperbolic disco garb. He's got chest hair like Nietzsche's mustache. It's said the very blasphemy of his hairy pectorals causes Gods to die when they gaze upon it. This is provably correct.

Email ThisBlogThis!Share to TwitterShare to FacebookShare to Pinterest
Labels: The Infinity Hotel