Everyone thinks that the Hydramancers are idiots, and they're 100% correct. Screwing around with hydra magic is just asking for complication.

But at least they're powerful idiots, and they're easy to understand. They just want to duplicate. Over and over and over and over. Forever. They hope to unlock the secrets of the Infinity Hotel by exponential duplication. For this they need calories and they need violence. They need FLESH, and someone to do the head-slicing deed.

They need flesh because there's a catch. Hydras conserve matter. Without additional input, each time they grow an additional pair of heads mass is taken away from other parts of the body. Mass and volume is maintained, heads increase, hence everything else gets a little smaller.

When hydras keep replicating heads without eating, they are designated Fraction Hydras. The heads and body keep getting smaller and smaller. Eventually the body disappears entirely. By that point you've typically entered a auto-cannibalistic feedback loop, forming a Broken Hydra. Broken Hydras will typically keep replicating smaller and smaller until they form an Annihilating Sphere.

The Great Hydra God is in fact the oldest of these Broken Hydras. It is an Annihilating Sphere so potent, with heads so small that they've begun eating the very fabric of the universe. They nibble with infinitesimally small mouths on cosmic strings, screwing up space-time all around them. (Functionally, I can't think of a better way to represent this than with a Black Hole. It's a Black Hole Hydra.)

The Hydramancers have been feeding the Great Hydra God meat, though is dissolves long before it reaches the main mass. Every time they do this it gets a little bigger. Despite the annihilating tendencies it still seems to accept Flesh. Flesh increases volume. The Black Hole Hydra gets bigger, never smaller.

No doubt eventually it'll become a problem that the other denizens of the Infinity Hotel can't ignore.

As an unrelated side note, it's fun to think about hydras as less like this: 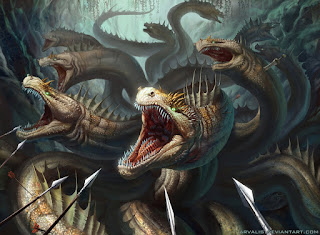 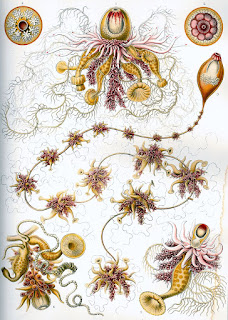 
Needlefingers looks like a piece of modern art: an experiment in Line. To a tasteless lay person she looks like a bunch of furious shifting black meaningless scribbles about 5'6''. She can duplicate anything. She does this by enacting a Banach-Tarski Paradox. The short (and probably incorrect) explanation of this is that she breaks the object down into a bunch of vectors and reforms two of them. There is no limit to the size or scope of the thing she can do this to.

She likes having tea with Dan Who Fails 5% Of The Time At Everything. She wants to duplicate him, for Science, and finds him fascinating. She doesn't like duplicating cruel jokes, however, and avoids actually carrying it out.

She wants to duplicate a Philosophical Razor, just to see if she can. Nobody knows what'll happen if this occurs.


Bob Brainheim, more commonly known as OH GOD RUN WHAT IS THAT THING AAAHHH!, is a giant multiplying brain monster. He's got tentacles and weird beaks and tumorous brain suborgans, and will definitely try and politely remove your skull and eat your brain. On accident. He sounds like the guy at the office water cooler.

He also holds one of the Five Philosophical Razors, Hanlon's Razor, specifically, ensuring that any act of malice (ripping skull tops off and eating brains, for instance) is actually one of ignorance or incompetence. So to all the universe, he is basically just the most unintentionally rude/clumsy brain eating monster that ever existed.


Gregor McGregor has 100 of every body part, and he's especially keen for you to understand: Yes. Every body part. It took a lot of work for him to get 100 of everything. Dude's a rock star in the Hydramancer world.

Functionally, think a Hecatoncheires, but just... more. And like waaaaaay too much beef. He can't really get in the deep folds and wash, so he smells like a friggin' used jock strap convention. He's also quite the Bro, and will get up in your face with his 100 faces and be an ass about 80% of the time. From what people hear, the other 20% he's a pretty chill guy.

Can definitely kick your butt back and forth across the Infinity Hotel.
at March 23, 2018