The Dungeon Swan lives in dungeons, and it feeds on HATRED. It is notoriously territorial, horrendously violent, and quite beautiful from afar. Get up in its grill and someone's going to lose a liver.

Etymology
The "Dungeon" in Dungeon Swan is a colloquial contemporary tag-on, originating from locals' observations of the Swans' lairs. "Swan", of course, being the harshest of Elven curses - one reserved for mortal calamity, infidelity, and royal gaffs. It is the verbal equivalent of wiping excrement off the floor with silk. Elven scholars widely believe that the creature obtained this name by the reaction the first Elves had to it - cursing in the foulest way they could while presumably running away at speed.

Description
Dungeon Swans are shapeshifters, so any description hence forth should be understood as an impermanent and temporary description of the creature. There do appear to be several favored forms, however:

HORRID PRETTY BIRD: A feathered fowl, reaching at maximum 5 meters in length, weighing around 50 kilograms, composed of either black or white feathers, and hiding a set of wickedly jagged teeth within their bills, of which they use to pierce and rend through the soft places of their prey.

PRIMORDIAL LIZARD: Either a snake with tiny arms or a stumpy lizard without legs. Up to 8 meters in length, with scant-toothed jaws so strong they can bite a cow in half. Scales of purest colors, decorated in hypnotic dancing patterns of black, red, and white.

DEADLY JAR: An ornate ceramic jar approximately six feet high with a single S-shaped spout, a handle, and a potted lid. The most dangerous of vase-shaped teapots. Painted in a bright porcelain red, with white and black decor circumventing the body depicting Dungeon Swan eviscerating their victims, or other grisly scenes. The contents of the jar are surmised to consist of pure, distilled hatred, which continuously bubbles and boils, hence the spout to relieve pressure.

AX MURDERER: A war-painted, kabuki-dressed human or elf wielding a bone-shafted obsidian ax. If the Dungeon Swan has recently claimed a victim, then it will also be completely covered in dripping, pulsating entrails. Thought to be capable of speech, but has yet to be witnessed.

Environment
The Dungeon Swan, prefers, of course, the Dungeon - an ecosystem so riddled with continued violence, suffering, and hatred that it can feed, while simultaneously being private enough for it to raise its young. Other popular nesting options include, but are not limited to: torture chambers, gulags, forced labor camps, drow citadels, royal palaces, and office buildings.

It finds aquatic habitats preferable. If the dungeon has some sort of pool or underground lake, the Dungeon Swan, or a pair of mated Dungeon Swans has made nesting within.

Behavior
Dungeon Swans consume Hatred. Hatred grows like grass. In hate-filled places, Hatred is grass: it grows from the dungeon floor, out of the walls, in sandy banks and on hard masoned stone. It creeps up through cracks in the cement until it forms a thick hateful brush - a jungle-mesh of acidic strangling weed. Touching Hatred Grass unprotected will send a person into a full-flown rage, or choke them with asthmatic reeds until they die as purple as Hatred Grass itself. Hatred Grass cannot be burnt, and cutting it releases rage-inducing particles into the air. The only safe way to be rid of it is to eat it. Hence, the delicate and beautiful hate-tango of the Dungeon Swan.

Solitary: A lone Dungeon Swan will eat up to 15 kilograms of Hatred Grass in a single day. Alone, it will tend to be migratory and adventurous, being so bold as to settle in lesser places of hatred, like the basements of bitter old people or in windmills.

Mated Pair: More dangerous than alone, particularly if they are raising young. A mated pair of Dungeon Swan will typically have settled down in a stably-hated location, and will so for several years. At this point they have staked out their territory, and will ruthlessly attack any and all creatures, big or small, within their lair. Typical Mated Pair behavior involves displays of aggressiveness towards intruders, lurking and plotting, and very angry highly-coordinated dances.

Triumvirate: On rare occasion, the Dungeon Swan will form a triplet. This is the most dangerous of all, as it involves the methodical escalation of mating rituals, resulting in aggressive displays up to 5 miles from the lair. Dungeon Swan in a triumvirate will mercilessly attack anything within sight, causing the surrounding countryside to wither into a blight. Killing one Dungeon Swan in the triumvirate will remedy this situation, although that is not so easy a prospect...

Caution
Aside from the Dungeon Swan being a horrible bastion of spitefulness and violent hate, the very worst thing may be its chief innate defense:

Those that deliver a killing blow to a Dungeon Swan will permanently be consumed by hatred, resulting in immediate indiscriminate berserking behavior and total violent madness.

Symptoms of killing a Dungeon Swan include: spontaneous bruising, internal hemorrhaging, bleeding from any and all orifices, loosening or outright falling-out of teeth, seizures, foaming/bleeding of the mouth, weakness, involuntary screaming, hallucinations about Dungeon Swan, and attacking every other living thing within sight and sound for the rest of ones days.


Symptoms for killing an adolescent Dungeon Swan are less severe, usually resulting in only mutilation and terminal weakness, laced with fits of rage.

Symptoms for killing newborn or young Dungeon Swan are entirely temporary. If it has yet to grow its exterior feathers or scales, then it can safely** killed. Fits of rage typically last for only a minute at most, then symptoms cease.

Hence, it is recommended that one should only attempt the extermination of Dungeon Swan while it is very young, while leaving adult Dungeon Swan the hell alone. Though, it may be worth it for a community to sacrifice someone to deliver the killing blow, then immediate murder them if it means being rid of the Swan for good.

*Fun fact: Hatred Grass can be processed and chewed upon like tobacco to produce Rage in the chewer. This typically lasts for a minute. If it's somehow swallowed, it lasts for days.
**Of course there's no safe way to kill a Dungeon Swan. In a life or death encounter this beast, someone's getting injured and someone's getting killed.
at June 25, 2019 2 comments:

Email ThisBlogThis!Share to TwitterShare to FacebookShare to Pinterest
Labels: Monsters

Who Waits Outside The Dungeon?

I swear, I've seen a table like this, but for the life of me I can't remember where. If you feel like doing me a solid, shoot a link down in the comments to similar lists. 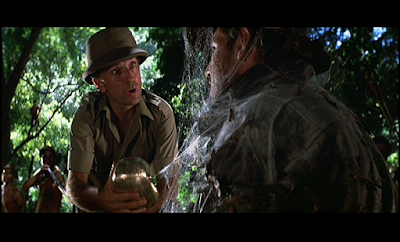 WHO'S WAITING JUST OUTSIDE THE DUNGEON DOOR?

I wanted to revisit the Forest of Fences (and the follow-up post), largely because I want to toy around with Depth mechanics (a la Ynn, Made In Abyss, etc.). And, because a certain popular HBO miniseries has given me the rare fit of inspiration. First, the concept post. Then the nitty gritty TBD.

Within the Forest of Fences lies a white tower. One sees it miles away, catching the sun like a beacon. It refracts like a lighthouse at sunset - calling the adventurous, beckoning with promise of power and riches. 'What marvels might the Tower hold?' say they, unknowing of the danger. 'What treasures might be found among the ruins of the sarcophagus at the Tower's feet?'

The treasures are all cursed. The lands around the Tower are a wild and cursed as well.

Cursed with the disease-not-seen. It's contagious. It kills everything it touches, and everything that touches the touched. It does not do this immediately. It can take days, weeks, or even many years to manifest, but all those who venture to the Tower and return alive eventually succumb to the curse. Their insides are eaten away bit by bit and they will never know why. Sometimes it effects even those near the Cursed - children in particular. The Elves know why, but they won't tell. They would rather have the subject be taboo than a known risk.

There are no predators in the lands around the Tower, at least not for men. There is risk of injury, to be sure, but there are no monsters. Unless, that is, you bring them with you.

Then why? Why go to the Tower, knowing the risk? Well...

Perhaps you don't know the risk. Perhaps cursed objects still sell well. Perhaps the demons of curiosity usher you hence. Perhaps there's something, or someone, there that you want.
Perhaps you cannot un-hear the call of the White Tower. Not until you see the madness at its depths.

No hostile monsters whatsoever. Maybe hostile people - scavengers like you. Perhaps the errant natural trap here and there. The main threat is the Curse. The closer you get to the White Tower, the worse the Curse gets. The DM should never explain the Curse's mechanics, only telegraph through encounters and the environment that things are getting worse.

The area is divided up into zones, based on proximity to the tower (roughly, following topography and such). Several locations are keyed to each Zone, each one working as a kind of subsetting Depth. All navigation is done in terms of the White Tower. Do you approach the tower? Do you retreat from it? Any other movement, tangential or otherwise, keeps you in the same zone.


*Assuming you don’t immediately turn back once you enter the zone. This reflects spending at least one travel turn in the area. It also assumes you have no protection from the Curse. **Whatever the White Tower zone is embedded within.

It should be pretty obvious at this point what the Curse is and what it's trying to replicate. The only thing I suggest for this is to not go the cartoon-y mutation route. I mean... I guess you could, but then you'd need to find another point to this whole nega-zone. Just keep in mind that the initial pull is Huge Risk = Huge, Dangerous Reward. The players and characters should know this. You can find hyper batteries from a thousand years ago, cursed rocks to slowly assassinate your enemies, and assault rifles in an age of spears; however, you'll die of 'natural causes' a lot sooner than normal. Power and Riches for Life. Having, instead, Power and Riches for Growing a Third Functional Arm is less of a conscious old-school risk-reward tradeoff and more of a win-win.

Effects of The Curse: