The Forest of Fences is intended to be a diversion or a roadblock, not a full adventure (yet). It could turn into so if some proper adventure locations are added to it. May be a future post.

Navigation
Every six hours the navigator of the party must make a normal Intelligence check. On success, the party goes the direction they want. On failure of 5 or more, they head away from the center. Normal failure and they effectively walk in circles.

Each success increases Depth by 4. Depth starts at zero, and can climb to a maximum of 20. If you press onwards beyond that (20), you pass through the middle of the forest, and Depth starts to decrease.

Broken fences will regrow in 12 Hours. Climbing a fence completely unassisted is a normal climb check. Doing it assisted will generally result in automatic success, unless you've got some deadly hazard. The view from the tops of fences can only give you brief insight into which directions lead towards and away from the center. If they do this give them +2 on Navigation rolls.

What Fence Is In The Way?
Roll 1d12+Depth every six hours.

16. Mushroom Stockade
Thick rubbery shrooms, red and white striped. They grow as tall as a man, and sometimes cradle their faces in the obese spiraling petals.

17. Bamboo Thicket
Quick growing and thick. Replaces itself in only 10 minutes. The leafiness hides a Chinese fingertrap of latticed stalk.

20. Rose Hedge
Thorny hedgerow covered in early spring rose bulbs. As Barbed Wire Fence, except that drawing blood (dealing damage) causes 1d4 roses to bloom. That many random players must Save vs. Magic or pick the roses, causing them to shrivel and rot instantaneously. Those affected cannot romantically love again until they have died at least once.

21. Bone Stakewall
Femurs, mostly. Consciously arranged and crosslinked. Sometimes there is a biting skull embedded in the network. As immobile skeleton. Can be turned as 3HD undead.

23. Stranglevine Lattice
Grasping and choking vines with a life of their own. As a large Assassin Vine, or system equivalent.

24. Corpse Concrete
Cemented agonized corpses. Save vs. Poison if you touch it. Fail, and you will flee every battle for 1 day. Clerics can feel their fear. Can be turned as 5HD undead.

25. Subliminal Noise Hedge
A wall of speakers, quietly whispering in a low pitch subliminal commands to turn back, masked in a leafy hedge. Save vs. Magic or be gently Turned as an Undead would, without the panicked rush. Most of the speakers don't work, but some electronics could be salvaged from the working ones.

28-29. Electrified Barbed Wire Thicket
As Electrified Razor Wire, but at any given point the thicket is is 3d10 yards thick.

30-32. Kill Zone
A gap in the impenetrable thicket leads to a self-contained grove. At last you have reached the center. No sounds but the dry grass crinkling under your boots.

Then there's thunder-crack, like all the gods released all their lightning in one salvo. Barbed wire thicket hides a machine gun nest with near-flawless field of view. Nobody mans the bunker. Were one to clear out the death-brush and penetrate the concrete walls one would only find a smoking (but intact) machine gun.

The ambush is as 3 salvos from the Machine Gun below before it runs out of ammo. 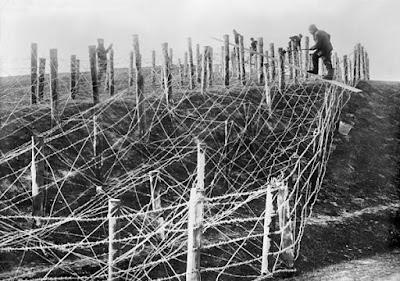 Few things live in the Forest of Fences. 1 in 6 chance of encounter every six hours.

1-3. Living Fence
Roll on the Fence table. That fence is alive. It moves, attempting to corral away from the center of the forest. If attacked it will retaliate.

4-5. Little Fey Girl
A little fey-girl tends the forest. Looks around 5 years old, hopelessly tangled hair and innumerable cuts on her arms and legs. She saw this forest conceived and born from the madness of War, and is small enough to squeeze into the cracks. She might help you, if you can prove you're not a monster. This isn't easy. You look just like one.

She can treat the fences as merely difficult terrain. If threatened she can even make them into Living Fences.

6. The Good Neighbor
A man, from where nobody is sure.

He replies: "The other side of the hedge", if asked. Dressed comfortably for the chilly morning.

He is heard, at first, a fence yonder. A gentle hyup-sound for heavy lifting. He is tearing down a fence, whichever one happens to be next. His arms are burly - he can tear down the fences with only his hands. Why is he tearing them down?

"There are no cows here." He'll reply. He has homemade blueberry wine to share.

7. The Eyes of Madness
Eyes in a flooded hole in the ground. Muddy white teeth grinning with the madness of war. Lowest Wisdom party member must Save vs. Magic or be Cursed. When this happens there is a very loud sound, like a misfiring gun. Every 12 hours consult the table for symptoms (1d8):

Talking to the affected about anything has a 1 in 2 chance of alleviating the curse for 12 hours, after which symptoms will reappear.

8. Steel Juggernaut
A juggernaut-beast of fire and metal sleeps in the thickest brush, silent as the dead. With a horrible cataclysmic screeching it comes to live, trampling the most dangerous of fences with a rolling thunder. It is utterly misanthropic, attacking indiscriminately with steel and fire. There is soft flesh to rend, though one must pierce the thick metal shell. It laughs a distant laugh, like a mad man trapped below the ground.

Mark I "male" tank. One operational QF 6-Pounder Hotchkiss gun on the right side. One operational machine gun in the front. It can do nothing to those on the left and behind, except turn or try to crush them under the treads.

There is a crew, but they are dead and mad. Treat as Wights with 1HD, immune to Turning while they're inside the tank. They cackle and taunt obscenities, reveling in the scream before the body is crushed or set aflame.

5 Treasures inside the Juggernaut. They smell like old soiled laundry and motor oil.

Treasures (1d20)
1. Steel Helmet
Negates the next 3 attacks to the head (excluding guns).

2. Pistol
As a +1 shortbow, but ignores armor. Comes with 2d4 bullets.

4. Machine Gun
One salvo. Attack as +1 Longbow, ignores armor. If it hits then Save vs. Death or die. 2d10 damage on Save.

6. Periscope
As telescope, but can be used while still in full cover.

7. Electric Lantern
As cone lantern, but immune to being affected by wind/rain/etc. Lasts for 3 hours.

8. Tires
1d4 of them. Heavy. Plenty of fun things you can do with rubber!

9. Artillery Shell
Requires 3 successive INT checks to understand how this works. Once this is done you can prime it for detonation. Deals 4d10 damage in 30ft radius, 2d10 damage out to 60ft. Save vs. Staffs/Wands for half.

10. Gas Artillery Shell
Requires 3 successive INT checks to understand how this works. Once this is done you can prime it for detonation. Emits caustic cloud of gas in 40ft radius that travels with wind. Save vs. Poison or die. On success take 2d8 damage and become blinded.

12. Mortar Tube
Nothing more than a very sturdy tube alone (can seal it and carry something valuable!), but with three successful INT checks it can launch a Mortar Shell up to 2400ft.

14. Flamethrower
One use. Shoots gout of flame in 40ft line, Save vs. Breath or 4d6 damage, and half as much next two rounds. Alternatively use Dragon Breath stats.

18. Waterproof Tarp
Gives advantage on any checks related to getting wet, slimed, or hit with acid.

19. Dog Tags
2d10 of them. Worth 5gp each to Clerics or those interested in the supernatural.

20. Scope
A precision military scope. May be outfitted on a crossbow to double its range increments.
at October 12, 2018