The Forest of Fences

There's a forest between a marsh and a mountain that has no trees, only fences. The fences grow like trees do, but they aren't always made of wood.

Wooden pickets, chain linked, bamboo stalks, barbed and rusted, wrought iron, hedge rows, electrified - to name some. The further in you go the more hostile they get. You'll start with the orderly fences of good neighbors. You'll end with electrified barbed wire thickets.

They tend to curve you back towards the way you came. Walking deeper constantly corrals you -  a russian doll of parabolas to discourage and entrap. Kill zones everywhere. 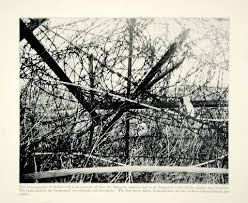 The Forest was meant to keep soldiers out. It is an artificial barrier - a minefield - meant for deterrence more than entrapment. When the end of the War came there was nobody to dismantle it. In the following millennia it began to attract things which didn't want to be found.

A little fey-girl tends the forest. Looks around 5 years old, hopelessly tangled hair and innumerable cuts on her arms and legs. She saw this forest conceived and born from the madness of War, and is small enough to squeeze into the cracks. She might help you, if you can prove you're not a monster. This isn't easy. You look just like one.

A juggernaut-beast of fire and metal sleeps in the thickest brush, silent as the dead. With a horrible cataclysmic screeching it comes to live, trampling the most dangerous of fences with a rolling thunder. It is utterly misanthropic, attacking indiscriminately with steel and fire. There is soft flesh to rend, though one must pierce the thick metal shell. It laughs a distant laugh, like a mad man trapped below the ground.

Some fences live. They move and shift, to confuse and entrap. They spring upon intruders with sudden ferocity like mouse traps, to break the spine and crush the viscera. They'll isolate a person, trap them in an cyst, and misdirect or shred. Unlike fences will never work together, though, even in their dislike for people. They get stranger the deeper you go. 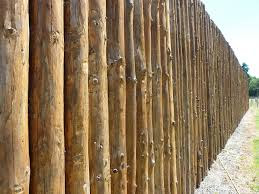 These things fetch a modest fortune. Woodsmen sometimes go to the edges of the fence forest to harvest scrap wood and metal and find them under loose rocks, buried half-deep in bone meal. 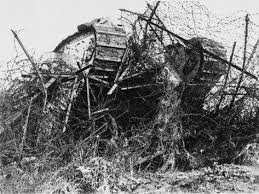 How do you deal with mile after mile of fences?

Well, I suppose you could break them down. You could climb them, or find a crack or imperfection where the fence goes over a large rock. You could burn the ones made of wood. You could make a series of bridges across the fence tops with long planks, though these will be impermanent in the shifting maze. Sometimes you can find a way around - though not often. Some fences are worse than others at shooing out invaders. Sometimes there's a door.
at September 23, 2018