Factions in The City of Truth


It's been a while since I've written anything on the City of Truth - spawn of Falselings, Polis of philosophers. Probably because it's hard to think how it'll fit in a campaign. Adding some Planescape-y factions is a good first step. 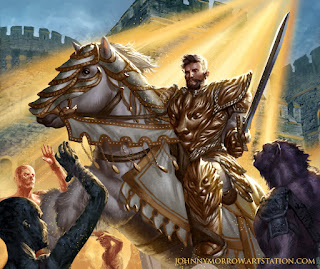 This produces something of a silly-squared, a negative multiplied by itself, a terribly not-funny funniness, an inversion of dark humor. Imagine you're watching Waiting for Godot, and then Godot appears, offers Vladimir and Estragon a granola bar each, and then they leave and all grab lunch and talk about their plans for home ownership or something.

The Anti-Absurdists are defined by their struggle. Specifically, their struggle against the dark humor spawned from a meaningless existence. They are people of action, of purpose, or at least they try to be. They try to bury their black humor in zealotry.

In short, they become Paladins, with all the zeal, hope, and violence that encompasses. As stereotypical as they get, completely lacking irony... or at least trying to. Within every one of them there is a repressed Monty Python character, no doubt trying to claw to the foreground from behind the face of a true believer.

Imagine Sisyphus with a sledgehammer. That's your Anti-Absurdist.

Things an Anti-Absurdist Might Say...
1. "There's nothing humorous about dysentery."
2. "My good blade carves the casques of men."
3. "There is always hope!"
4. "The next one of you I see doing a silly walk will be flogged." (Dead serious)
5. "We all struggle with making jokes about dead babies now and again."
6. "Don't do drugs, stay in your compulsory education program!" 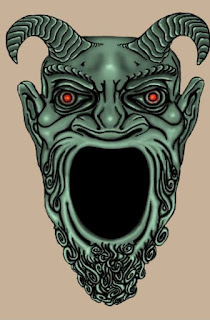 Some, an even rarer subset of Tiefling, have heretically put forward the notion that this theory is reversed, that this is the False Universe and the Other is True. An even rarer subset of these have doubled back and reversed their reversal. Rarer subsets develop still, though scattered in time by unlikely probability. This function of subsetting, though, approaches an inversely exponential asymptote, and from this infinite impossibility came the Hyper-Skeptics.

For you see, you can't not possess epistemic knowledge of a category if that category no longer exists. Nobody can worry about whether one can know things about, say, trees, if you destroy all the trees and wipe all memory of them forever.

They are hunted down and destroyed, whenever possible. They are fine with this. It suits them.

Where have the Hyper-Skeptics Hidden...
1. In a whistling cave, courting a Green Demon Face.
2. In plain sight, ready to unleash a sudden murder spree.
3. A place with no sound, no light, no smell.
4. In memory - their last stand.
5. The middle of the featureless ocean.
6. In the refectory realm of mirrors.

Pretty simple: they try to always tell the truth. 100%. They believe lies, in any capacity, despoil this True universe to which they have emigrated. And when the truth cannot be said, with absolute certainty, they say nothing... 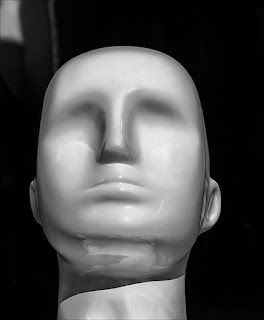 Which means they never say anything, ever. Which makes recruitment kind of difficult, when you think about it. Though, gaggles of mute Tieflings tend to draw attention, and subsequent explanations from stranger to stranger and friend to friend will eventually inform an onlooker. This has, frustratingly, led to some confusion over the years as to their purpose, particularly outside the City of Truth, where the philosopher is a rare creature.

Some Neverlies even go as so far as to sew their mouths shut, cut out their own tongues, or poke holes in their throats and breathe through that.

More radical Neverlies might attempt to destroy the institution of Language and communication entirely, that another lie may never be spoken. Such Tieflings are as feral creatures: deaf, mute, blind, limbless, and dangerous. Self-mutilation so total often bears powerful magic. They are monsters, robbing people of their senses, dooming them to void.

What People Might Say About the Neverlies...
1. "They cut their devil-tongues, that they might not blaspheme!"
2. "I thought they were just rather polite..."
3. "They couldn't bear the taste of this world."
4. "Their silence is an unbreakable oath of devotion to the Emperor."
5. "I'm not sure what their deal is... Do you?"
6. "They're always so judge-y... with their EYES."

The core of their beliefs is that there exist, or might exist, an even Truer realm than this reality. They aim to find it, by whatever means.

They are baseless scientists, ruthless self-experimenters, ardent Rationalists. They try everything and anything, not knowing what may or may not trigger an ascension. One might find them walking backwards down the road as likely as attempting to get high off of crushed acorn powder. All the things that caused Tieflings to come from the False Realm to this one, they shall try again: drugs, philosophy, mathematics, athleticism, asceticism, all of it.

Including attempts to launch into space. For truly, the Truer realm must lie somewhere above, or else it would not be so hard to reach it!

To this end, they build giant slingshots, catapults, winged devices, and rockets. BIG rockets. Absurd rockets. The kind that are a thousand times more likely to blow you up than send you to space, and even if they got there, they'd just burn up, freeze, or suffocate. They effectively make giant flying exploding tombs.

What the Rocket Men are Making...
1. Something like the Taj Mahal, except it explodes.
2. Ships that might sail the winds into space.
3. New methods of drug intake: a) Making holes where there shouldn't be. b) Inhaling something you rather shouldn't. c) Licking the unlickable. d) Plainly just some means of self-harm.
4. Huge robotic Kaiju claws.
5. Treadmill-powered sky elevator.
6. Catapults that shoot catapults, that shoot even smaller catapults, that eventually shoot a person.

They're Reality TV stars, straight off the set of Survivor or Jersey Shore. Their 'truest selves', flamboyantly displaying their opinions and emotions like incessantly petty peacocks. Backstabbing, 'being real', attention-seeking, politically incorrect sociopaths. They treat everyone and everything around them like obstacles, like things in the way of their true selves, providing they don't serve some purpose. Entertaining to watch, insufferable to be around.

This is where Tieflings get their bad reputation. The True-You's, frequently given no responsibilities and often harried by the other factions, have a tendency to leave and either get immediately eaten by wildlife or rise to the ranks of tinpot dictators.

Meetings between True-You's are virtually never productive. Hence, they tend to organize within independent cells, surrounding themselves with vulnerable sycophants. It's usually a matter of time before they leave the City, or become summarily exiled.