Twilight City - The Artifacts of Imperium

Within the Pomerium lie seven sacred artifacts - divine tokens which guarantee the dark imperium. Each is guarded by a cult devoted to its stolen god's worship, and there are traps - means to confuse and eliminate would-be thieves. Should all the items be stolen, the city shall be fated to fall.

The Kettle of the Mead of Poetry

Lost with the destruction of the Deep City of Glazz'gibrar, and supposedly still contained within the ruined Glass Palace. None dare approach the city, for during the civil war a terrible monstrosity was unleashed that remains there still, warding the city from tomb thieves and those who seek to reclaim the monarchy's treasures. 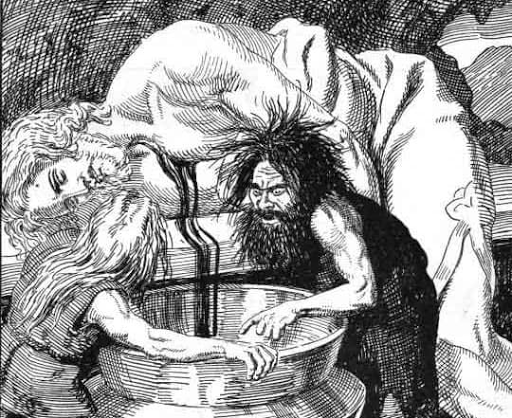 By boiling the life-blood of poets within the kettle the red Mead of Poetry is made. This drink grants pure inspiration to all who consume it, allowing them to effortlessly produce fantastic works of art and song. Historically, only those of the royal house could partake in this great pleasure.

But now the royal house is extinguished, and their taboos with them. Their responsibilities have passed to senators and archpriests.

The Matriarchs of November will pay three queens' ransoms to those who can retrieve the Kettle and bring it back to the Twilight City.

The Black Altar of Unveiled Reality

A relic pilfered during the Evocation of the forgotten Dead Dreamers of the Deep. It is a cube of black marble, strikingly lucid in appearance and perfect in dimension. Those who have touched it can always find it once again, no matter what reality they inhabit. 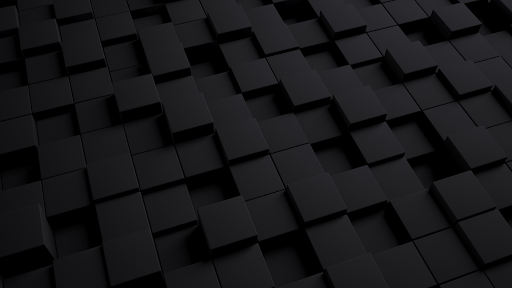 It is cold to the touch, distinct, unforgettable. Nothing can replicate this exact feeling. In all realities it exists, waiting to jar the initiated from their dreams and reawaken them. To those who have touched it, if ever they are in doubt of their verisimilitude, may seek out the Black Altar in whatever realm they exist and touch it again. It will always feel the same, and it will always cut one out of the false world.

The Black Altar is kept within the Senate Chambers, and is hence protected by the Imperium Blackguards, who carry no weapons but hide one unbreakable adamantine fiber among their top-knots to bind and garrote those who threaten the sanctity of the Pomerium. Senators take their oaths of office while touching the stone, and begin each session by doing so to ascertain their reality. In this way they are all protected from giving away their political intentions to dream spies and mind skinners.

Wielded throughout the ages by Blackguards and Paladins of legend alike, this profusely heavy horse-cutting-sword requires tremendous strength and skill to wield. However, its strikes never fail to cut its target in twain. Lower from upper, left from right, soul from body - those struck by the sword are always split in perfect halves. It's said that the sword was wielded by the first mythic hero of Elves to split night from day, man from woman, the land from the sea, and heaven from earth. 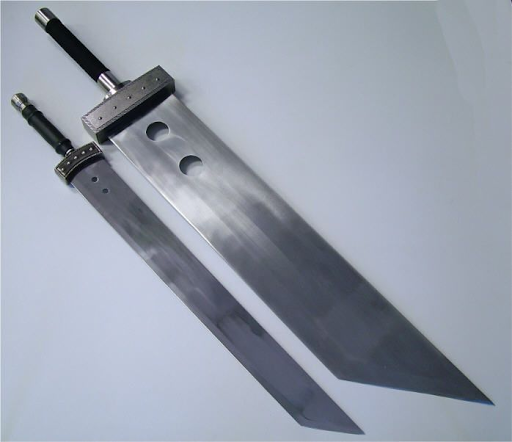 It is kept in the Temple of Jabber-Dal, adorned with many mirrors, that from any point within one may see nearly the entire interior. There it is guarded by the Manxome Cult, whose members split their souls in twain. Each cult member carries two bodies: each holding half of their personality and memory. Most often, one is fearsome, hedonistic, and violent, while the other is demure, calm, and rational - like Hyde and Jekyll.

The Sword is kept with eleven identical false copies, each one bearing a Curse of Instant Death upon those who would manipulate or touch it. Only the High Priestess of the Manxome Cult knows which Sword is true, and she is split into a coy liar and a cryptic truth-teller.

The Mill of Hell

A modest-sized mill bequeathing to its users limitless oil, flour, and phosphorus. It takes the strength of six laborers to grind it. Pilfered from the Deep Dwarves, whose god gifted it to provide sustenance and comfort for many.

The oil produced by the mill has many uses: cooking, lubrication, illumination. It burns bright and long, and effectively protects hair while giving it a beautiful luster. Foods cooked in it are delicious and filling. Even a cup of the flour, when cooked into a flatbread, is dense and high in sustenance, keeping a strong adult fed for a week. It is the panacea for armies on the march, and an ambrosia to the hungry. The phosphorus glows in the dark, and has numerous military, agricultural, and alchemical applications. 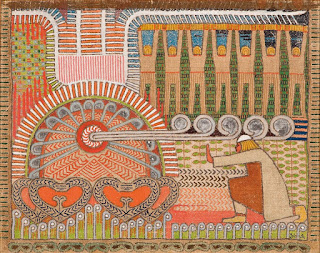 If it has so many good uses, then why is it called The Mill of Hell? Because all of these substances are extraordinarily flammable. In irresponsible hands it has been the cause of countless deaths, by flame, asphyxiation, or explosion. Legions of mill-turners and priests have perished in fires related to the Mill, not least because the grinding of the mill increases this risk all by itself. It is a greed trap: turn the mill too fast and it will spark, setting everything alight.

Thus, within the Temple of Hell's Mill there is the ever-present steady tempo of drum and pipe. To the somber beat everything is extracted with careful consideration by priest-laborers constantly skirting the line of maximum production and total annihilation. There are special roles within the Temple: the musicians whose ability to keep tempo, the Conductor-Priest who commands the speed of all things, the strong men and women who grind the wheel, and those who guard against sabotage.

No flames are allowed within the Temple. It is a place of total darkness. To the drow this is not an inconvenience. It is, however, very cold. The Temple is guarded by large cultures of Brown Mold. Any flame brought into its dark passages will be swarmed and snuffed out by the icy fungi. The priests of the temple know which passages to traverse and which to avoid, and how to step among them without causing the Mold to attack. Infested skeletons patrol the halls, and there are many hidden pits and mold-seeking phosphorus traps.

The 360 Idols of the Dark Sea Monks

Each Idol grants a unique blessing to those who pray before it on its corresponding day of the solar calendar (there is no effect if it's not its day). Such boons are typically minor things: to have the wind at your back the entire day, to come upon unexpectedly minor wealth, to be blessed in cleaning. The blessings on the solstices and equinoxes, though, are by far the more powerful.

Some days will grant Curses, though these are far more rare and typically minor. One exception being the Idol of 169th Day (July 15th), which kills those who pray upon it. This idol is prayed at regardless, either in respect of ritual sacrifice or for those seeking a quick death.

The Temple of the Dark Sea Monks is guarded by a terrible curse: those who enter it cannot leave. They are forever compelled, body and spirit, to that place. The monks within are peaceful and serene, knowing of their everlasting fate. When they die, they become ghosts that wander the grounds, then as shades as whatever remnants of memory fade. Eventually they sink into the stones, becoming one with the Temple and creating its distinct shadow-imprints.

The monks are maintained by food and water tossed over the threshold by the lay-volunteers at the entrance. Supposedly, this is how the idols were stolen in the past: tossed out by those within, fated to never exit themselves, and destined for whatever punishment the remaining monks could muster.

The Idols are arranged in a rotunda, as the degrees of a circle or compass. There are noticeably little gaps in the arrangement. Six Idols have been stolen over the millennia. Once by the great Thief Mandolin, twice by the Traitor-Priestess Whose-Name-Is-Burned, and thrice again by unknown looters during the Nightmare-Razing of Glazz'gibrar.

The most powerful of these Idols is the one for the Omitted Leap Day. Brought out once every hundred years, it is said to have granted a 24 Hours Time Stop to those who prayed to it - they would inherit this leap day, being the only ones affected by time during this period. Unfortunately for the Monks, this one was stolen in the most recent razing and its whereabouts are unknown.

A silver painting commissioned during the reign of Amathia, Second Spider-Queen of Glazz'gibrar. The painting is constructed so that an image of perfect beauty is formed in the reflection of the observers' eyes. The image is indescribable and fleeting. Those who gaze upon it know what they've seen but forget its exact nature, and so must continually stare to have it remain.

It is guarded within the Temple of Beauty by the thirteen-eyed beholder Azrith'rir, who is perpetually addicted to the painting. All thirteen eyes fixate upon a more perfect version of itself, being deeply in love with the image. It constantly mutterers sweet nothings in dead languages to woo it. Azrith'rir will protect Beauty with its life, and will cruelly enchant those who linger too long before the painting with ironic acts of self harm.

Those who become obsessed with Beauty inevitably become Beholders as well. Azrith'rir is merely the oldest of these - Beauty having warped its body over years to accompany more means to view the painting. None are exactly sure what Azrith'rir was before Beauty twisted its form. Perhaps an Aboleth, a medusa, a proto-elven wizard, or a prince of oozes.

The Keystone of Kin

A relic acquired from the sack of the Walled Forest of Kin, and preceding Evocation of their goddess of springs. It was said in legend that as long as the Keystone remained within the Forest its walls would forever repel invaders. This was evidently true.

It's said that the Keystone is a fragment of the Spring Goddess's mind. From it flows a crystal water containing the memories of the foundation of the world.

Water carries memories. One must know its language, Aquan, to read them.

The water lingering in underground aquifers is old and pure. It has travelled long and slow in its journey. The memories in these pools produce lucid thoughts, like watching video of something happening as opposed to trying to reconstruct it from memory. 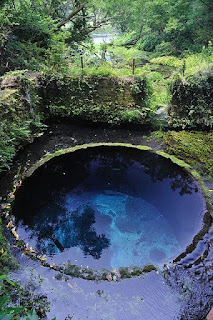 The Halls of The Keystone Temple are long and twisting, full of Romanesque arches and somber refectory pools. Within the thoughts of visitors resound and echo with tumultuous noise. To not give way intention one's thoughts must be excessively shielded.

Its priests train themselves to completely silence their thoughts, acting purely on bodily instinct, that they may move throughout the Temple quietly. They drink directly from the spring, filling their minds with the music of eons past that it resonates in perfect clarity within the temple.

Historically, these priests were used as assassins against enemies of Glazz'gibrar, external and internal. They trained to be empty vessels of death: instincts honed to impossible speed, never surrendering information to the enemy - quiet, invisible, and deadly as nerve gas. The elves called them the Deadly Silence, for entire Houses would quietly perish without so much as a peep. Sometimes undiscovered until the bodies were rotting and the smell began to bother neighbors.