At the heart of the city of November lies the space where gods come to sleep and die. It is a cold, dark place, protected by layers of the dead and their caretakers. The mute gravesmen-lictors who patrol the pomerium wear the insignia of axes to denote their religious right to kill defilers. All others must surrender their weapons and spell foci. Soldiers and provincial administrators are not permitted.

Its circumference is marked by gravestones containing the bound souls of honored drow priests. On them are written the oaths that the priest took in life - fearsome, ascetic, inhuman. ("This priest never consumed anything which cast a shadow for sustenance"; "This priest was never seen by mortal eye."; "This priest mummified their living flesh without assistance.")

They also contain the warning: these elders guard the Pomerium still, whose boundary this demarks. Their shades remain within the stones, guarding against trespassers. Should the eye upon the stone detect weapons or means of magic, their wraiths shall emerge to ward and defend the district. These wraiths do not have eyes. Instead they sense by passing hand over visitor, draining some modicum of life even in cursory examination. Best to have turned back before then.

Or to have come up with a clever means of hiding them.

There are exceptions, sometimes, to the rules. If the armies of November have slain or charmed a god then the soldiers will be permitted a triumph through the pomerium, dragging its corpse in chains or in honors to the cold slumbering depths. Its leader, for having conquered divinity, momentarily becomes one, and becomes immune to all laws of the city for a period of one week.

Of the armies of November the most feared are their priestesses. They are masters of Evocation - the military action of stealing the tutelary gods in siege, sack, or raid. The loss of the blessings of a tutelary god bring utter destruction and ruinous fate upon strongholds and cities. It is the fall of empires.

In times of the Spider Queen, these gods were lured out of their cities and shrines by trickery, craft, and charm. The enemies' shrines were stolen in the night and its priests murdered as false caretakers. The gods were seduced and led through confounding underground and dimensional mazes, strung up upon adamantine webs for the Queen, and by proxy her Venomous Goddess, to poison and devour.

The sustenance of these gods was used to birth thousands of godlings over the millennia.

But since the Spider Queen was overthrown, her House annihilated, and worship of the Venomous Goddess outlawed, a new practice has formed. Instead of devouring these gods they are given reverence and rest. They are given cults of sleepless followers, endlessly devoted to prayer.

This has only strengthened their capacity for Evocation.

But why are the priestesses of the drow so skilled at Evocation?

The drow are, quite simply, far better at religion than anyone else. They do not compromise and they do not hesitate in religious matters. They have resolve. Whereas the elites of any society will nearly always barter and compromise with their religions to maintain their positions of power or comfort, the drow have no such allusions. Their priestesses and leaders will proudly die and suffer torment to prove their devotion. What their enemies will do for their gods the drow will unhesitantly do ten-fold. The clerics that rise but once in a generation on the surface will be present in legion among the Twilight Armies. 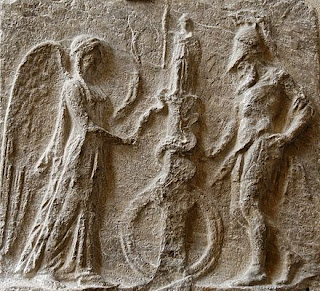 Despite the stereotype and the ancient myths, the gods do not hate the drow. On the contrary, they love the drow. They love their fanaticism, their will. They love the dread respect that the drow give them, and they love their devoted art. The artisans of the drow spend centuries honing their craft in contemplative sleepless solitude - a hundred lifetimes of mastery channeled into charming one particular deity. Gods rarely receive such flattery, even from other gods.

All prejudices against the drow ultimately branch from this jealousy - this insecurity that your gods love them more than you, despite all efforts. Before the religious might of the drow all are like an unfavored sibling - a Cain before a righteous Abel. After long years of propaganda and generational hate, this core reason has largely been obfuscated to petty xenophobic bigotry. People have forgotten why the drow should be feared.

The drow have not forgotten, though. They are well aware of their strength. They simply bide for time, researching and infiltrating their future foes, formulating stratagem to steal the worlds' gods once again...