The Greater Houses of Twilight City

The Greater Houses of Twilight City were already long established by the time of its republic. Their lineages stretch back millennia, each to ancient priestesses who tempted gods. Each of the Old Houses holds in their family's possession a Persona - a symbol of their divine seduction and a powerful magic object in its own right. Personae can take many token forms, traditionally: death masks, symbols of authority, weapons, or any myriad of marvelous objects.

The Artifacts of Imperium are no doubt Personae, though no House can lay claim to them, as was determined by agreement of the legislative assemblies after the fall of the monarchy.

While these objects hold potent magical effects, it's rare for them to be brought out into public. No House wants to risk losing it, and in turn potentially losing their legitimacy in the eyes of their peers. Houses that lose their Personae often disintegrate, either disappearing into ignominious legend or mysteriously reforming centuries later after the object has been reclaimed.

Each Greater House takes its name from the god that it stole, and in doing so granting the gods' tutelary status - in imprisonment, entombment, or bribery by worship. Some gods have been seduced willingly, others tricked and permanently interned.

(A note on drow names: The First is the personal name. The Second is the Mother's. The following particle indicates rank: du = slave  ; di = house member  ; di la = esteemed member; de = matriarch . The final name is the House name.)

Persona: The Kris of Dark Waves, whose blade can pierce any hide and find any heel.

Their priestesses wield hidden invisible blades made of glass that break off and splinter inside the wound. They hold blackmail on every public figure in the city and are said to use bees as spies.

One of the oldest and most prestigious Houses of the Twilight City. Before the overthrow of the monarchy they were considered the Second of Loyal Houses, behind the Royal House. Now they're the First. Their Matriarch, Laetha de Kaisar, presently leads the largest coalition within the Senate. She is a shrewd politician and an expert practitioner of Psychology. Her enemies have given her the title The Numb Knife in dread respect of her demonstrated ability to wedge apart alliances.

Persona: The Flail of Seven Parts, made from the braided leathered strips of back flesh of seven kings who refused surrender during the campaigns of the Horned Conqueror.

Their priestesses wield cruel whips and keep seven diaries detailing every slight against them - one for those within the House, one for those outside, one for other priestesses, one for slaves, one for their elders, one for their children, and one for people like you. Though they rarely enact direct retribution against full members of another House, they will frequently prey upon undistinguished slaves, subjecting them to pain, torture, and mutilation in appeasement of their Persona.

Though unpopular for this tactic, they nevertheless remain powerful due to the influence of Cordatha de Timurin, who maintains an iron grip on the silver trade and controls substantial ownership in the city's slave markets.

Insignia: A Bloodshot Eye Pierced and Threaded by a Needle.           Tutelary God: Arn, God of Fate

Persona: The Apocalyptic Hourglass, keeping imprisoned the Sands of Time, which continually counts down to the next cataclysm. 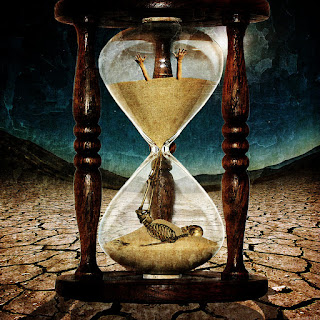 Their priestesses have their mouths sewn shut with fated thread to prevent them from gibbering prophecy. They communicate in writing or a fast one-handed sign language. Their training has them develop a parallel mind so that they can maintain their wits despite the overwhelming influence of the Apocalyptic Hourglass upon the psyche. Due to this nature, it is extraordinarily dangerous to attempt to read their thoughts. Anything that would affect their minds has a 50% chance of failing automatically, feeding back into the caster.

Alylin de Arnkar is a recluse to Twilight City social and political life, often acting through her House Abettor Nizana, who is an energetic liar. Alylin and other wizards of the House's inner circle reside in a tower on the outskirts of the city, said to be weaving a tapestry that will foretell all events unto the end of the world. They started at The End and are working their way back. Who knows how far they've gotten?

Persona: The Grave Ledger, which continuously records the names of the recent dead. 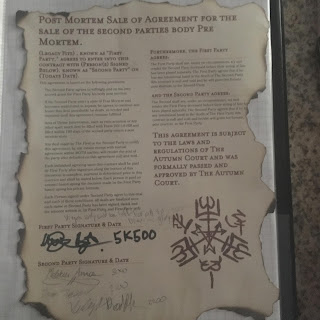 Grachia is known for three important assets: lawyers, necromancers, and necromancer lawyers. Their priestesses can always be found at the doorsteps of the recently bereaved, offering funeral rites (or necromantic bindings). They carry quills made of phoenix feathers, speak very softly, and travel in groups of no less than three. They sew necromantic contracts into their robes, protecting them from magic and blade for as long as the contracts remain valid.

Their matriarch, Miz'ra de Grachia, is considered by many to be one of the most intelligent and beautiful drow in the city, due in no small part to her overbearing girth. Such is her weight that she must be carried by four servants if she wants to go anywhere, and keeps as a retinue her seven undead 'loyal husbands' bound by 'til-death-do-you-part marriage contracts (that do not expire until the death of both parties). Her jovial attitude and appearance should not fool you though, she is without a doubt the most powerful necromancer alive, and not only commands an enormous living family (she alone has mothered 72 children to date) but an entire tree of undead ancestors running back hundreds of years.

Persona: Mar, The Worm King. The wriggling orb sheds the True Worms, of whose simulacra all the world's worms are descended.

Fingol-Mar's priestesses are bankers and accountants of all the House's stored riches, mineral and caloric. They protect their portfolio with legions of indentured servants, both alive and dead, and carry strange cubic abacuses to assist with calculation. They are simply thrilled to offer loans and extend lines of credit, especially to those they know are unreliable. Often debtors' flesh is worth more than the loan itself - bodies can be made to work for long after the spirit has died, after all.

Quil de Fingol-Mar is the House's infrequently seen matriarch, and that's because she is the Worm That Walks - the wielder of the Worm King. Long ago the Worm King devoured her flesh, but due to her influence she kept her mind and memories. Now she is the progenitor of all worms - virtually immortal and eternal in power for as long as her mind lasts. It's possible the Worm King ate Quil's memories and is simply masquerading as her to ascend in power. For what dark purpose few could guess...

House Fingol-Mar is filled with empty halls bearing bowls of rotting fruit bearing all manner of carrion, but mostly writhing worms. They prefer apples. It is a cold and lonely place.

Persona: The Frozen Titan Eye, from which flows the coldest vacuous waters.

Their priestesses wear black hooded robes and chain great weights to their backs, in supplication to the deceased Titan, who used to carry mighty glaciers upon his back across the land. His great body is interned within the Mendal Peak, a mountain on the outskirts of Sunless Rim. From his cold-preserved eye flows a constant stream of pure water where the sun strikes it, providing mineral-infused irrigation for Mendar's lands in the prosperous Feyfjord.

House Mendar is a new House, younger than a decade, having split off from House Fingol-Mar upon their recent acquisition of Mendos. They are staunchly allied by kinship and economics, due in no small part to the diplomatically-minded Zephyr de Mendar - the robber baroness of wheat. "Gold!... That Edible Gold" she calls it. While other houses were adjusting to life on the surface after the revolt, she was already three steps ahead: planting the seeds of her House's prosperity centuries ago.

Persona: The Ikordian Mantle, gifted to athletes who have earned the honor of defeating 100 enemy contestants of equal rank. Its wearer cannot be pierced by any weapon or magic. 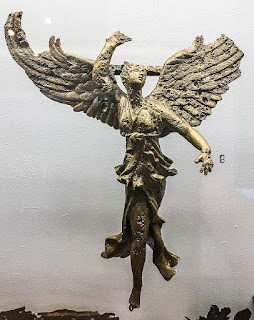 House Kordelia's priestesses are fucking cut. They spend the decades of their youth training, fighting, and competing for the favor of their Matriarch and Persona. Their physical primes last a hundred years. They hunt beasts and man alike, preferring to capture their quarry alive that they might later be used in the city's gladiatorial arenas. When in the city, Kordelia's priestesses often carry leaden training weights on their shoulders, arms, and legs that look like folded wings.

Matriarch Ghilaera demands from all members of her House a total willingness to sacrifice and an utter ruthlessness. She has a win-at-all-costs attitude, and has no mercy for those even hinting at projecting weakness. Winners get to stay in the House. Losers are expelled. Cheating is only cheating if you're caught; hence, the Kordelians cheat a lot.

In one notorious instance she expelled three of her own daughters (in which all three were revealed to her to be cheating), which brought her near-universal condemnation from the city's elders as an overly strict use of her powers as head of the family. Two of these daughters eventually died, separated from their networks of support and socially poisoned by House Kordelia's no-holds-barred culture. One eventually became Quenze, now the matriarch of House Hakar (and has since been restored in good graces as an ally of Kordelia, and is also high literally all of the time).

Persona: The Great Pipe of Purple Smoke, whose blessings ascended the Warlocks of the Crippled Kingdoms

Their priestesses carry long pipes made of a thick hollowed deep cave fish bone, who carry the sweet stench of recent death wherever they go. It's the drugs that make the smell, though, not the fact that they animate animal bones. They're very 'clean' when it comes to necromancy. 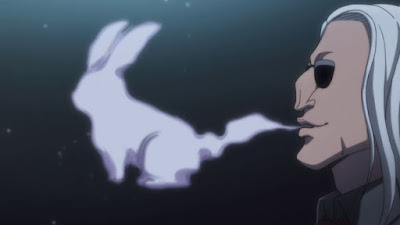 House Hakar keeps an impressive menagerie of loyal skeletal beasts: pegasi, giant snakes, tigers, basilisks, rust beasts, deer, and supposedly even a regenerative bone hydra. Their estates are covered in a perpetual purple fog that addles the minds of the uninitiated, and are guarded from the sky by flocks of supplicant black pegasi notorious for their petty Mean Girls senses of humor.

Quenze de Hakar is a laid back person, which is very weird for this city. It's the depressant drugs, no doubt - the cocktail of opiums breathed in by her massive hallow (sic) Great Pipe, and the fistfuls of mushrooms she consumes that would probably kill something ten times her body weight. She's much nicer than someone raised by Ghilaera would be expected to be. She loves beautiful things and beautiful people, and surrounds herself with these comforts in excess. You won't find anyone else easier to deal with in the city, provided you don't mention her mother...

Persona: The Heartbond Locket, which contains the still-beating heart of a goddess.

Their priestesses wear bright colorful cloaks that flow from their wrists and bladed forearm guards. They build callouses on their hands and fingers that allow the slightest touch to snare. They pursue those whom they love with a furious and sometimes murderous passion. Woe to those who befall a priestess of House Nix's advances.

Their leader, matriarch Koren de Nix, is a cannibal. Cannibalism was the exclusive privilege of the now-extinct Royal House. It has become outlawed during this era of the republic, leaving those practitioners who had previously been bequeathed such rights in a tenuous predicament. House Nix tries to keep it a secret, but all the other Houses already suspect the truth.

House Nix is allowed this latitude because they control a monopoly on some rare species. They farm and grow bugs: spider, mantis, and scorpion. Big ones for guarding the estate, small ones for the poisons, and eggs ground up for the protein. Their estates are littered with them, fielding a perilous hazard for any visitors, who find frightening numbers of eyes and fangs in every corner.