The Isle of Tyrants

(One of the advantages of RPGs is that you can play out some really fun and stupid ideas. This is no doubt one of them.)

Somewhere in the southern ocean near the Empire of Truth and the Kinglands lies an island paradise. Beaches of pure crystal water, warm sunny weather, and an entire religiously devoted servile populace to keep the island's guests in wealth, luxury, and comfort.

The guests exclusively being, notoriously, the absolute worst people on the planet. Only tyrants, unjust dictators, powerful madmen, and maybe evil geniuses can become guests upon the island. (And their families and friends, if they want to bring them along). Everyone else will be repulsed.

The island was leased to the Serene Order of Peace for a period of one century, approximately three centuries ago. Since then the lenders have stopped existing, having fallen to a revolution or a coup or something of the like. No nation as of yet has decided to substantiate any claim on the isle. Why? Well, because the Serene Order of Peace will fend off invading armies to the death.

The Grand Idea was to lower the exit cost for tyrants so that they would increasingly give up their power and go retire in luxury and peace. If the exit costs of tyranny were high, the Order reasoned, then tyrants would cling to their power, forever fearing retribution and betrayal. If they could easily leave when things got dicey, then they would, accelerating peaceful transfers of power.

Political science theorists (and the tyrants themselves) loved this idea. Everyone else hates it. Hates it. To even have the social experiment the island had to be fortified. It had to be militarized. Its keepers had to be zealous beyond reproach, incorruptible. It had to be a religion, with punishments for deviation along religious lines, not simply punitive.

And so the Serene Order of Peace militarized itself in order to repel assassins and expeditionary armies from its shores, to assuage tyrannical distemper abroad.

There is a catch: any of the tyrants that claim the island's sanctuary are not allowed to leave. They're not allowed to communicate with anyone on the outside. Tyrants are allowed to bring their families, friends, and mistresses, but none of their personal guards. Arrivals will be vetted by the Order to determine if they actually want to remain with the tyrant or not (those who don't are released and granted passage to any port they'd like on arrival). Andre Le Penn - Oversaw the military occupation of the Island-City of Deadwind. Massacred approximately 1200 people over the course of three days and claimed sanctuary on the Isle of Tyrants before the government shifted again.

Hammilhan The Impaler - An infamous border lord, hated by the royalty of the Kinglands for his murderous treatment of their merchants and emissaries. After impaling some ten thousand enemies of the state on pikes, including most members of his family and those of his supporting families, he sniffed the power shift and left for the Isle.

The Lich Arugal - He threatened Death to leave him alone and he’s regretted it ever since. After ruling a surprisingly boring dictatorship of undeath for several centuries he’s got weary of existence and now seeks to woo Death with numerous attempts at suicide. He keeps a list of crossed-out ideas. Pleaded for asylum to throw himself into this particular volcano, which he believes might finally kill him due to nature of its volcanic glass.

Dr. Chrome - Attempted to destroy Space. Almost succeeded. Since arriving she’s been suffering severe mental decline and can barely remember her own name, let alone that she almost destroyed Space. Though, it all could just be an act to earn her sympathy... You never know with evil geniuses.

Major General Finius Darkside - Tried to invade the Moon with an army of shadows. His forces were repelled in a stunning decisive defeat by the confederate forces of the Greater Mares. Retired in shame.

Queen Corvinia Eleneal - A thousand-year old elven tyrant of a country that no longer exists. So-called the Queen of Secrets. Been here for centuries. Rumored one of the first ‘guests’. It’s surmised she secretly engineered this entire social-political experiment to ensure she had a place to retire in comfort. Treats mortals like pet dogs.

Lubinia Black - Supposedly a retired Time Tyrant - a time-hopping traveler that poaches timelines and systematically ruins them one at a time until they experimentally get the results they want. Brought with her a train of cohorts and oddities from failed realities. Even the other tyrants fear her.

The Count of Nowhere - The scum mortgaged the county he lorded over in a loan from Hell, and defaulted. The land was swallowed up and tucked over like it had never been, with all the land’s people trapped within and dragged down to Hell. Using laundered funds he’s retired to the Isle of Tyrants, and fears Hell’s collectors, who care not for the laws of man and nature. So far they’ve managed to collect his name and his sleep. He requires heroin. Lots of heroin.

It's a volcanic island surrounded by shark-infested waters. It is, in every single way, an evil genius volcanic lair. There are hot springs and beaches for recreation, exotic animals to hunt and eat, tunnel networks, and a five-star resort excavated into the volcanic crater. There are underground safe rooms, guard monasteries, defensive tunnel networks, bunkers, and magical armories. 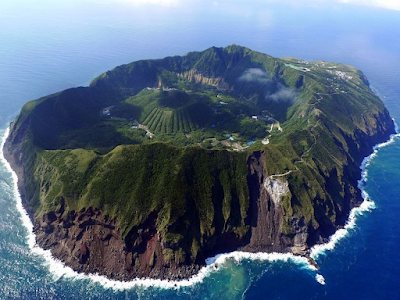 The island is surrounded by perilous reefs, steep cliffs, and the upper atmosphere is poisoned by fumes produced by the volcano. Worst of all, though, is the Thunder Jack - a flying moray eel the size of an two 18-wheelers back to back. Nobody is exactly sure why the eel doesn't attack the inhabitants of the island, but there are theories: 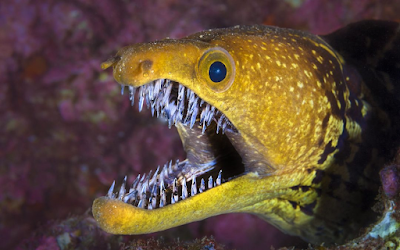 Any approach is dangerous on its own, not to mention the guards of the Serene Order, who maintain a watch 24/7.

The monks wear military dress of the color of jungle shade, and when in formal function wear berets of baby blue. They wield long bows and hefty knives, though each is trained in the prevailing ascetic-warrior traditions of the day.

They employ a number of outsiders to do work for them: experienced volcanic miners, merchant captains, turncoat diplomats, interpreters, mercenary admirals, and the odd bureaucrat. Their contractors are often paid in highly-valued volcanic glass - useful for destabilizing necromantic fields.

A woman named Zill wants you to kidnap or kill Andre le Penn, one of the recently arrived guests upon the island. This man ordered the death-by-torture of everyone Zill had ever known: her family, her friends, her neighbors. Five generations of everyone she knew, murdered. The hatred she feels for this man cannot be understated. She would end the world to kill this man.

Andre has three hobbies that might leave him vulnerable: imported wine from the Empire of Truth, having numerous affairs with domestic staff, and painting using exotic ingredients. The more suffering you can impart upon this man the happier Zill will be. She'll promise you her family's lands, recently reacquired in land reforms, which she can no longer bear due to the pain of the memories.

Hammilhan "The Impaler of Karkenhome" has decided that coming up with exotic executions for his failed ministers and rivals is a far more fulfilling existence than hedonistic spiritual peace on this island. He wants out. The Order, of course, will do everything in their power to prevent this... He'll need to be smuggled.

He promises you a just and mighty reward, a tyrant's ransom if you complete this task. He'll try to avoid being specific as to what exactly that is. If it comes down to it he'll promise a castle belonging to one of the people he'll need to depose. He'll say it's his to give. (It's not)

But if that doesn't fool you, you could certainly get a reward for delivering him unto his rivals...

Brother Philox, a senior monk of The Serene Order of Peace needs assistance: one of the tyrants on the island is managing to smuggle communications to the outside world, and they need some people to find out who. They've recovered some coded messages, and suspect they're connected with some power moves and assassinations abroad, though they can't conclusively draw any links yet.

They suspect one of the monks of the Serene Order is an infiltrator, and they need some outsiders who are beyond suspicion to root them out. Or perhaps you could puzzle the foreign political situations together yourself and infiltrate one of the tyrant's cohorts to find out who's breaking code.

If one of the tyrants is found out to have been breaking their covenant with the Order they'll be unceremoniously thrown into shark-laden waters. (Death by exile, essentially).

Secretly, it's a framing. One of the tyrants doesn't like one of his tyrant neighbors, and wants to frame them with breaking covenant in order to get them killed. Y'know, typical scheming tyrant stuff. The question is, does it really matter? Here's an opportunity to off a horrible person, framing or no. 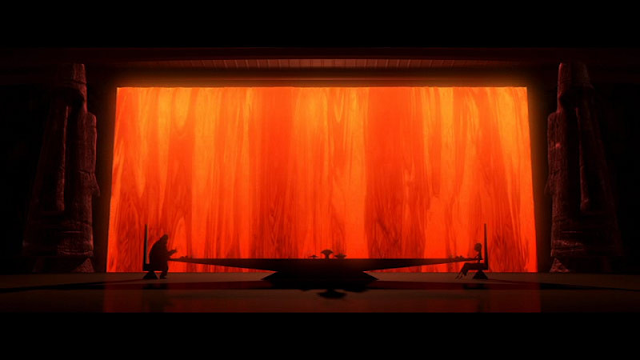 Someone wants you to kidnap a tyrant, a king, an archpriest, and take them to the Isle of Tyrants for retirement. First you need to kidnap them (you'll have some help). Then you'll need to convince the Order that they came here of their own will. Do this and you'll be handsomely paid with some definitely-embezzled money or possibly a chest full of jewels.

Why not simply kill the tyrant? Well, the replacement tyrant isn't terribly comfortable with this precedent for obvious reasons.

The High Council of the Serene Order has a big problem: Sister Carthage, a senior priestess of The Serene Order, has gone rogue. She's convinced two dozen hardened members of the Order to join her rebellion, staking out guerilla positions in the island's jungles and volcanic tunnels. They've taken two tyrants hostage, threatening to kill them in the event of an attack.

No lists of demands have yet been made. The High Council is in shock. Sister Carthage was one of the most effective and loyal monks they had. What could have caused her to turn so? Is she being manipulated or mind controlled? One of her hostages is an infamous sorcerer... What does her rebellion hope to accomplish?

Plans within plans within plans... A scheme is afoot, but whose? Is Sister Carthage in control, or is one of the tyrants secretly pulling the strings? Is this all a part of a hidden agenda from the High Council, or perhaps an outside force? Who's lying, and who's telling the truth? Does it matter?

The Isle of Tyrants isn't exactly what you'd call 'cheap real estate'. It's strategically located, posing security concerns for no less than half a dozen nation-states, close and far. The Dragon-Mansa, the Divine Emperor of Truth, the Wizard-Traders of Chronulus, the Twilight City Greater Houses, the Children of Raki, all of them have a geopolitical and/or mercantile stake in the island.

Any or all of the above will pay handsomely for intel about the island: