I needed to make these for the Mo-RON GLOG class. I'm shocked, SHOCKED! Nobody's made Really Big Spider or Robot Squid GLOG classes? What?!

For Every Template: +1 HP, +1 to Stealthy Business

Spider
You're a really big spider. You don't have hands. Well... You almost do. You have eight claws. The only math you are familiar with is geometry. You can "talk" to other PCs based on familiarity. You can talk to other spiders. You have a bite that deals 1d6+STR damage.

Wall Climbing
You can climb up walls at will without a check (unless it's super difficult like greased walls), as constantly being under the Spider Climb spell.

Web Weaving
You may take 10 minutes to construct a sticky, near-invisible web, taking up a 10x10ft frame. You can produce this quantity no more than twice times per day.

Web Attack
When you hit an opponent in melee, you gunk up their business, causing a cumulative -1 to all their rolls.

Trap Making
You excel at digging and making camouflaged traps. You may take 20 minutes to construct concealment in a given soft-grounded area. This is functionally a covered 10ft pit trap.

Sensitive Hairs
Your sense of touch is finely acute. +2 on all checks regarding touch and investigating objects (even magic ones). Additionally, if you're within 50ft of all of your webs or traps, and it's conceivable that a line of web could run between you and said webs or traps, you can tell if anything is touching your webs or traps.

Venom
Finally, your venom has developed. You may choose to employ venom after a successful attack. Pick one of the following options:
A) Paralytic Venom - 1/Day a successful bite attack prompts a Save. On failure, the target is paralyzed for 1 Hour, and loses 2d4 Strength and Agility for 24 Hours.
B) Cytotoxic Venom - 3/Day your bite attacks deal an additional 1d6 poison damage.
C) Forgetfulness Venom - 2/Day your bite attacks cause Forgetfulness, causing the target to be incapable of repeating the same action two rounds in a row. Lasts 1 Hour.

For Every Template: +1 HP, +1 to Dexterity every 2 templates. 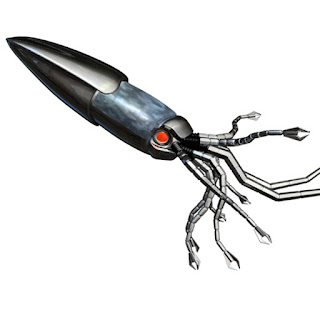 Squid
You are a squid. A robot squid! You don't have hands. You instead of four tentacles. You can "talk" to other PCs based on familiarity or by ink writing. You can swim at a speed of 30'

Oil Slick
Twice a day you can produce an oil slick covering a 10x10 ft patch of ground, or a 15x15x15 volume of liquid. Additionally, you may substitute one of your attacks with an oil spurt. If doing so, make a combat maneuver roll. If you succeed, the opponent is blinded until they spend one round cleaning out their eyes. (Only works if they have eyes). Usable 3/Day

Invisibility
You can turn yourself Invisible, provided you're in contact with some surface and you're not moving.

Laser Eyes
Pew pew! You have laser eyes! Twice per day you can shoot lasers with an effective range of 400ft at a single target in line of sight. Deals 2d6 damage, no save.
at April 02, 2019