A most terrible curse wrought by woman scorned - a court sword which murders the objects of adultery. With every victim it grows, to match in size the magnitude of its malice. It will bring no harm to the husband-lover, but it will skewer and impale those he desires, through that which he touched in lust.

It's victims remain, skewered on the blade, neither alive nor dead. They cannot perish or rest so long as they remain. As the blade moves quicker their screams of pain reach fever pitch.

It rests quietly during the day, wrapped in bed sheets from the wedding night. It will come out at night when called, if the husband has recently had an affair. It moves silently, floating acutely to the ground, lest it has victims who moan in low pained tenor. It comes in the night, harpooning through open windows or cracked-open doors, to skewer drowsy or sleeping maids.

To Summon It, One Requires:
- A Court Sword, pricked with ones own blood
- A Wedding Ring, to be slid from the tip to the hilt.
- A Personal Gift, given from the husband, tied just above the pommel.
- The Bed Sheets from the night of their wedding.
- A Hateful Incantation 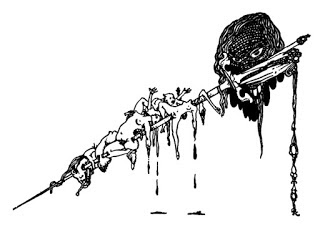 - Immune to all damage from piercing weapons.
- Advantage when attacking intended targets.
- Construct Immunities.
- Only women may harm it. With exception to brothers of the wife, who deal half damage to it. Bridesmaids from the wedding deal double damage.
- An invisible spirit guides the blade. It cannot be harmed by normal weapons. It has the same stats as the blade itself, with AC as unarmored, no damage, and no treasure. If it is killed, then the women who summoned it can never do so again. If the blade is destroyed, it will disappear, but can be brought back once more if the ritual is repeated.

This submission is kept in https://creativecommons.org/licenses/by/4.0/
You may find the details of the community project over at Cavegirl's place.
at April 10, 2019