What Are The Wizard Police Dealing With Today?

The Old Prison is the headquarters for the Anti-Magic Weapons and Tactics Police in Wizard City Hexcrawl, which continuously deal with problems within the city that may perhaps affect the holdings of the property-owning class. 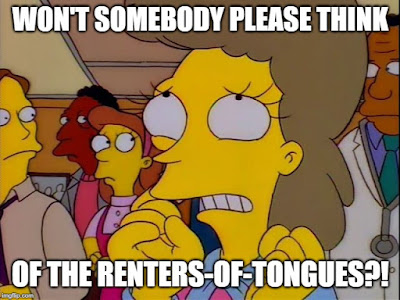 On the up side, at least it comes with the perk of a License For Brutality, provided you aren't using it on someone with powerful connections. On the down side, you gotta deal with this shit:

WHAT SHIT DO THE ANTI-WIZARD POLICE NEED TO CLEAN UP TODAY?


The Old Prison itself is where the Old Judicial System used to keep The Old Prisoners, back when they still had jury trials and 'Common Law'. Now it's effectively an office building, training facility, and fortress for the AMWAT police, with only about twice as much hopelessness and half the inmates.

Wizards undergoing 'administrative punishment' are typically taken there to enact their sentences given arbitrarily on the spot by the various police forces. As such, there is a modest bureaucratic force there to undertake such measures, such as spell-fee collection or the dispellment of punitive Curses.

A front assault upon the institution is not advised. Neither is a multi-pronged assault. In fact, it's just better if you never assault the place. It's chocked full of full-time wizard killers - they're wise to every permutation of magical shit that one can be thrown at (see above table) and they rarely take prisoners, despite the fact that they work in a prison.
at March 01, 2020