The following transcript was released in the month of September in the year 2024 as part of a police transparency initiative regarding the infamous Caulders serial killings, which resulted in the deaths of four young women between the years of 2012-2013. The release was the result of a decade of litigation spearheaded by community accountability groups in conflict with the Caulders family lawyer. Stephen Caulders IV, having since resided at Jackson State Prison, was found clutching this document during his arrest by Michigan state law enforcement.

WHAT IS THE UNICORN?

The Unicorn is a supposedly mythical creature originating in the records of the Indus Valley civilization. It is described on stone tablets, stories, paintings, and The Bible as a pure white horse or goat-like creature sporting a single spiraled horn emanating from its skull. It is connected to a number of myths and legends, and is depicted across a widely throughout the centuries. (SEE FIGURE 1)

The Unicorn is a woodland creature, evasive and highly sought after by noble hunters for the magical potency of its horn, known as the alicorn, which is said to grant purifying powers when ground into a fine powder. According to the legends, a virgin maiden of pure heart is capable of luring and taming the creature, thus allowing its capture.

The ancient Greek historian Ctesias said that the unicorn resided in India. Modern historians have thus incorrectly deduced that he meant modern-day India, when in fact he meant The Americas. This confusion has manifested frequently, but became clear with the records of Christopher Columbus, who discovered the New World and called it by its true name. Thus, it is indicative that the Unicorn was not located in India, but in fact was located in America.

Before the Columbian Exchange in the 15th and 16th centuries, the Americas had no goats or horses. Therefore, the unicorn, whose myths far predate the Exchange, could not have been a goat or a horse. It was, and I have confirmed this, a deer. Specifically, a white-tailed deer.

Many artists of medieval and renaissance times had never seen a unicorn. And so when it was described to them, they would perpetuate the myth that it was horse or goatlike. The natural halfway between these two is the deer. Due to the nature of communicating information from the Americas to Europe in this time, this translation error was explainable. There is evidence, though, that at least one artist saw an actual unicorn in this time, and correctly understood that it was derived from a white tailed deer, and not a horse or goat. (SEE FIGURE 2)

Myths about the unicorn are frequently conflicting, but by reading between the lines we are able to formulate some important questions. In many paintings, the unicorn is depicted as having been leashed by a king's crown. In every depiction, the unicorn is always shown from the side, even though any humans present are generally seen facing straight on. (SEE FIGURES 2 & 3)

Why is this? It cannot be explained purely by artistic preference. There must have been a reason, and from my repreated studies I have been able to guess why: the unicorn does not have two eyes - it has only one. One large eye, square in the middle of the skull. It is a deer with one eye and one central horn.

I believe I have discovered the reason. Cyclopia is a rare condition present in vertebrates that results when the brain doesn't cleave into right and left parts. It has been witnessed in cows, goats, and even humans. (SEE FIGURES 4 & 5) This birth defect often results in miscarriage or death hours after birth. Not so, I've found, in deer. Deer with cyclopia, according to my findings, are capable of living well into adulthood, and are capable of reproduction and mating just like other deer. My studies seem to indicate that only male deer are capable of surviving cyclopia, for I have never seen a cyclopic doe. These cyclopic deer, I surmise, actually achieve a supremacy during mating season, and are actually preferred among the does over their non-cyclopic competitors. Perhaps this is due to its ability to skewer contesting rivals straight through the middle during a charge. But perhaps, I think, this is due to some additional vitality granted by the cyclopia - something which pre-scientific societies ascribed to 'magical powers'.

If this is true, then this might explain the demand for the alicorn (the horn), which no doubt contains some sort of medicinal property created by the unique biological conditions of the cyclopia. Perhaps it is true, and the unicorn's horn contains the biological secret of immortality - some chemical organic cocktail which has purifying properties. Perhaps, stem cells, or even the long-sought psychic ability? Alas, more data is needed.

But why the crown? What is the significance of those royal leashes that have kept the unicorn bound in its various depictions? Perhaps it ascribes the divine connection between royalty, God, and the unicorn. Only a divine object can control such a magical creature. Regardless, this gives ample opportunity for further investigation.

For instance, is it possible for there to be a human unicorn? 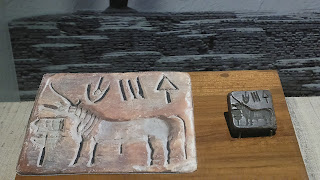 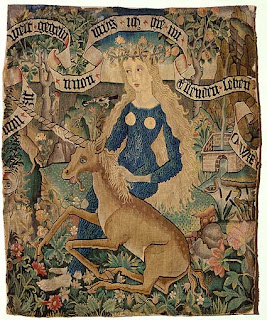 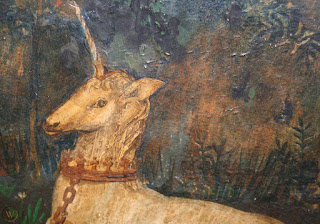 Stephen Caulder IV unfortunately committed suicide in prison. His body was found in 2015, having died from an "extraordinary brain hemorrhage"  according to the autopsy report. Details in said report provide a photograph of the scene, showing Caulder having "slipped and fell on the exposed post of his bed". A message was carved on skin of the legs and abdomen, reported by the decease's sister upon examination in the funerary parlor:

THERE WAS SOMETHING IN THE EYE.  I SAW IT AND IT SAW ME.

THE DEER LET OUT A BRAY AND IT CAME CRAWLING OUT.

I WASN'T PURE OF HEART. IT'S COMING FOR ME. SARAH, GOD, HELP ME