The Whale Docks in Wizard City Hexcrawl are typically the first stop for newcomers to the metropolis. The River Third is a deep salty estuary backed up by mismanaged engineering and environmental wizardry: full of exiled whales and experimental run-off - a dumping ground for all sorts. 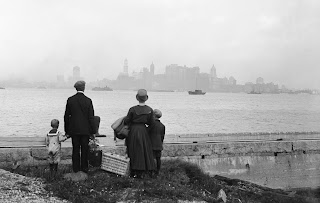 We shall focus on the last of these, for potential jobs and quests.

A rapidly decomposing whale corpse has beached itself upstream of the docks. The Port Authority headed by Nibly Shanks, a stout pencil-pusher with a penchant for prestidigitation needs someone to get rid of it before it explodes. Normally they'd handle it in-house, but they've already surpassed allotted overtime payments for telekinetic crane-operators.

Rewards (Pick One):
Complications: It's heavy, huge, and gut-retching from the smell. The longer it sits, the larger a bomb it becomes. Nobody wants to go near that thing, except for a very persistent necromancer calling himself Ill Intentions Jr.. Nearby householders are anxiously in denial about the possibility of cataclysmic explosion.

Ill Intentions Sr., wealthy homeowner, has recently constructed a form of walking house that went on an uncontrolled rampage through several city districts. He wants to 'sue the vandals that have damaged his property'.  To do so, he needs some subpoenas delivered. Signatures for proof of delivery are expected (but between you and me, nobody's going to look too closely at them).

Rewards (Pick One):
Complications: Obviously, these 'vandals' aren't going to be too happy that the guy who made the thing that wrecked their homes has the gall to sue them for damages. Also, at least one of these victims is a wizard gangster.

Gorbo Morlock, purveyor of "Gourmet Meats" on Food Street needs fresh kinds of 'new' meats for his food cart. He'll pay by the pound for any meat you bring in. No human flesh! He suggests going to The Drain.

Rewards:
Complications: Obviously, meat is either pricey or dangerous. It's a meat-eat-meat world out there.

Solutions: Go hunting in The Drain. Dumpster Diving by Le Restaurant Tranquille. Hit up the Sisterhood of the Cell for their 'rejects'. Go dungeoneering and pick up anything you kill.

Nibby Urgo needs some vagabonds to test the security measures on his new summer home, Urgo Manor. You can keep anything you steal from the place, provided you give him notes on the break-in so he can patch up security flaws.

Rewards:
Complications: You weren't the only group contracted for this job. A wizard gang is acting as your competition. The estate itself is full of magical traps, some of them potentially deadly. Also, it's in a rich district, so there are police checkpoints around the hex.

Treasures: Select wines in the cellar (1d100gp each), jewels in the eyes of the crow-steward (2x200gp), animated tools (if you can catch them), pricey furniture (1d10x10gp), expensive soaps in master bedroom (1d4x20gp), portraits (1d6x20gp), books (1d10x5gp), musical instruments (the piano in particular has some very pricey ivory keys).

Dorothy Lung insists that somebody stole her favorite dream - sailing a boat upon sunset clouds. She's beside herself, and is willing to pay if somebody can bring it back. She suspects somebody at the Better Reality Union is involved, but she's too frightened to confront them. She had a painting of the dream, but even that was stolen, too!

Complications: The Better Reality Union is a red herring, but is capable of replacing the dream (for a cost). Lung's memory is failing, she might not even recognize the player-characters when they return.

The Dream-Thief is a serial cat thief cat living in a nearby abandoned alley, who steals and hoards good dreams. The Dream-Thief, at night is highly territorial and capable of magically enlarging into a large panther. By day it's just a sleeping normal-sized cat.

The painting was stolen by Swiggly Wren, who pawned of the Painting to The Unsigned Pawn Shop in order to pay rent. It's still there. He used a Knock spell to open things up without a fuss.

Rumor holds that Gallax Hall was built upon the ruins of itself, and that those ruins hold treasure and danger. Classes are still held in the basement, despite complaints from students about ghosts, moving statues, mysterious janitors and the Department of Torture.

Complications: Gallax Hall is a dangerous place, full of monsters, traps, factions, and mystery. Venture at your own peril.

Zarloq The Brown has been publishing increasingly influential philosophical papers on the nature of undead and their consideration for personhood. This is making things complicated for certain industrialists utilizing zombified and skeletonized labor, and they've secretly contracted: [1) The Dead Janes 2) The Black Magic Fraternity 3) The Fire Brigade 4) The Black Dragons] to 'convince' him to stop publishing. The gang is outsourcing this job to potential new recruits/associates.

If you make it look like a rogue undead did it, there's a bonus available for you.

Complications: Zarloq the Brown is, of course, a wizard. Not a very powerful one, but a wizard nonetheless. He is protected by a number of esoteric abjurations, including a secret basement vampire with a vested interest in keeping him safe.

A masked anonymous graduate student working on behalf of their professor wants you to steal some data and project ideas from a rival researcher so they can beat their rivals to publication. Violence isn't off the table but is discouraged: the employer doesn't want too much attention drawn.

9. Help with an Experiment
(Science Task)


Ms. Elisa Vot, intern at the Bureau of Spatial and Temporal Matters, is conducting an experiment and requires some assistance. She needs someone to set up these very-complicated-looking tripod devices at five points in the city in order to 'pentangulate the hypothesized spacetime fluctuations'.

Devices must be placed ideally as close as possible to center in the following hexes: Black Crater, Machine Magic Market, Portal of Screams, Wandering Monster, The Drain. All devices must be simultaneously activated in order for proper data collection.

There are two spare devices available in the event of damage or loss.

Complications: The devices are large, cumbersome, fragile, conspicuous, and expensive-looking. A person is encumbered when carrying one. Synchronously activating them requires someone at each device - the party may need to hire out some help. Additionally, local residents or thieves within the particular hexes might take alarm or interest in these devices.

Reward: A prototype Hyperspace-Adjacency Glove, which allows to wearer to be considered adjacent to pointed-at objects. 10 Charges left. Technically illegal for non-Bureau members to have. She'll declare it 'lost' to the Bureau.

Kilo suspects that there's some sort of rabies-like neurological disease going around that's transmitted through Mo-RON mecha-suits. He wants proof: a conclusive report, or better yet a live sample.

Barnaby Watkins: brain in jar, political pariah, and political activist for fellow Mo-RONs, is also concerned about these reported 'rampages', especially after fellow brain Hardy was recently attacked by what is suspected to be such a case.

Barnaby suspects some kind of conspiracy afoot, like a counterintelligence operation by the secret police to disrupt their activist movement and the Mo-RON population in order to justify cracking down on dissenters.

Both contacts recommend starting at the Machine Magic Market and information gathering with local groups of Mo-RONs.

Complications: All physical evidence from previous cases has been recycled or destroyed - only testimony from witnesses and half-ass'd police reports are available. A recent case has been discovered (Hardy's assaulter), but physical evidence is soon going to disappear as scrap-dealers and debt-holders sell off the body for parts.

The Truth: there is an Intellect Devourer serial killer behind these assaults. It uses a special neurotoxin injector to paralyze target Mo-RONs, before surgically removing the brain with magitech power tools and crawling into the victim's brain-chassis to assume their identity with their consumed memories. It then puts the discarded brain scraps into the chassis it previously occupied, claiming it attacked them (which the physical evidence will agree with, mind you).